PEN America Calls on Alpine District to Retain the Books

UPDATE on Aug. 11: At a board meeting this week, the Alpine School Board announced that they will not be removing the 52 books from their school libraries, in recognition of students’ free speech rights. Jonathan Friedman, director of free expression and education programs at PEN America, said in response: “For now, the Board will be “temporarily restricting” the books in areas of libraries, where parents can elect to opt-in their children to read and take them out. While this still constitutes a barrier to the books, and questions remain about how these particular books were evaluated for this restriction, the Board has taken a step in the right direction, recognizing students’ rights and the need to follow considered processes.”

NEW YORK–Fifty-two books by 41 authors will be removed from the libraries of the Alpine School District in Utah, the state’s largest district, following a decision made by the district. The ban affects noteworthy titles such as Nineteen Minutes by Jodi Picoult, Forever… by Judy Blume, and the 2015 Caldecott Honor Book, This One Summer, by Mariko Tamaki and illustrated by Jillian Tamaki. The books were selected for removal after an internal library audit determined that they contain “sensitive material” under a new law, and “do not have literary merit.” Twenty-one of all titles removed (42%) feature LBGTQ+ characters and or themes.

Jonathan Friedman, director of free expression and education programs at PEN America, in response, said: “Sweeping removals of books are not supposed to be a routine thing in school libraries. Students have a right to learn about the variety of human experiences and perspectives that these books provide. Serious questions remain about how this decision was arrived at, and whether state statutes were properly applied.”

Friedman said: “This is a concerning escalation of the book banning we saw last school year. Elected officials and attorneys general are now easing and encouraging banning, facilitating the fulfillment of demands from local activists. We call on the Alpine School District to retain these books, demonstrate greater respect for considered processes and students’ right to read.”

PEN America Utah Chapter Leader Paisley Rekdal said: “Alpine School District’s ban on these books—some of which are beloved texts from my own childhood–is a grave and disappointing mistake. Banning books that tackle the complexity of sexuality, gender, identity, and young adulthood out of the misguided fear that younger readers can’t distinguish between fact and fiction, and won’t be able to comprehend and even critique for themselves any idea that challenges them is both patronizing and naïve. People long for more, not less complexity, and young readers should be given the texts—and tools—that allow them to navigate the world they actually live in.”

The audit was catalyzed by the passage this spring of a new law, H.B. 374, “Sensitive Materials In Schools,” and new guidance released by the Office of the Attorney General on June 1 that directed to Local Education Agencies (LEAs) “to immediately remove books from school libraries that are categorically defined as pornography under state statute.” At a July meeting the Alpine School Board explained that they conducted reviews of 275 books from lists provided by parents over a three-day period, resulting in the decision to remove these 52, and to put 32 additional titles into a more thorough investigation this fall, when they can be read “cover to cover.” 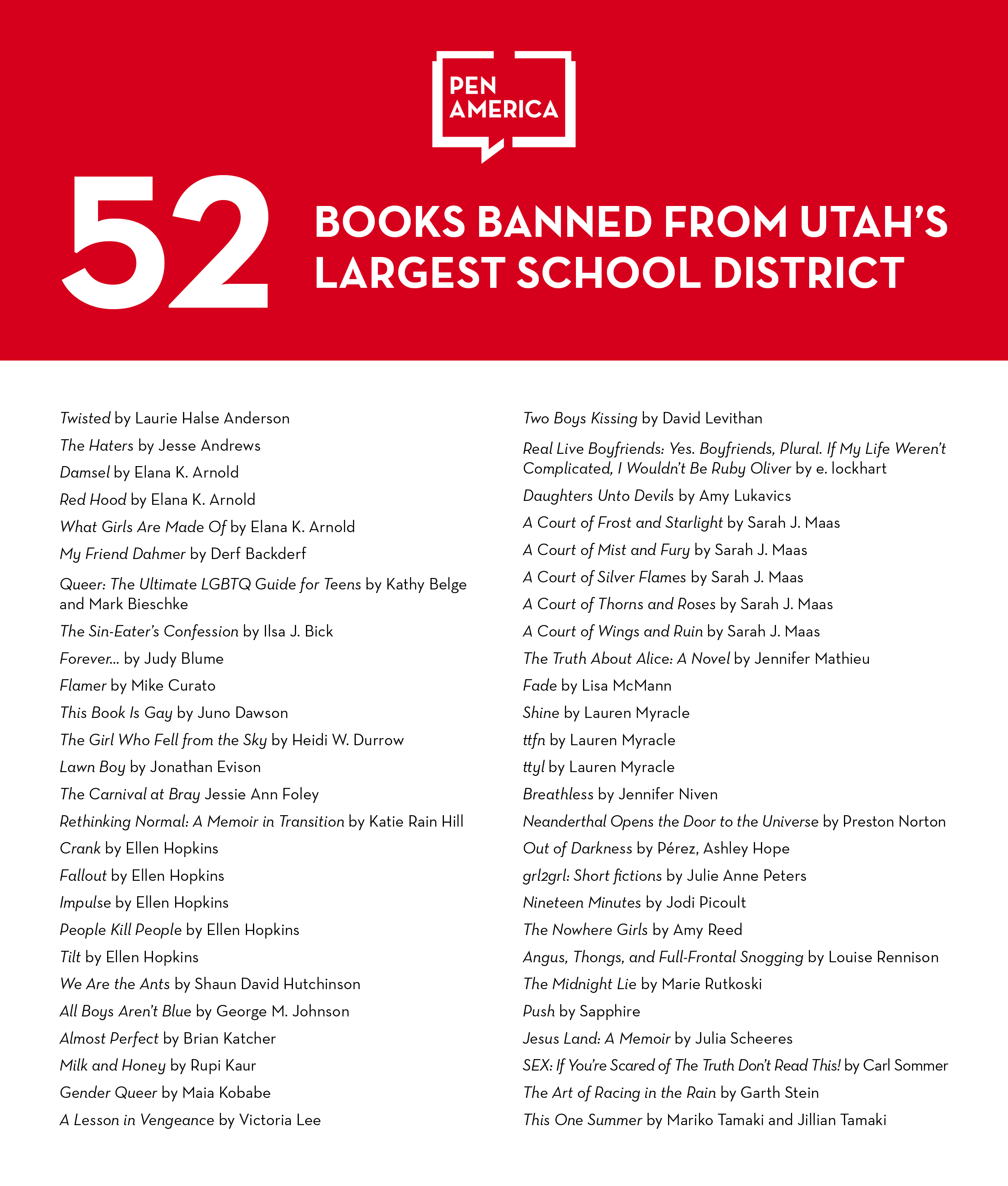