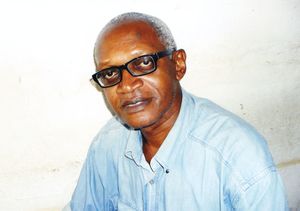 PEN American Center welcomes the release of Cameroonian poet Enoh Meyomesse from prison. Meyomesse, approaching 60, is a writer, blogger, historian and political activist who has published more than 15 books of poetry, prose, essays, and works on political and cultural themes and is a founding member and president of the Cameroon Writers Association.

Meyomesse, a recipient of the 2012 Oxfam Novib/PEN Award in recognition of his continued work in the face of harassment, has suffered persecution at the hands of the Cameroonian regime after an unsuccessful 2011 campaign to run for president against the long-ruling incumbent, Paul Biya. Meyomesse was denied access to a lawyer and no witnesses were presented for his court cases, in which he faced politicized charges for crimes which he did not commit. On 27 December 2012, having already spent 13 months in prison, Meyomesse was sentenced to seven years’ imprisonment and fined 200,000 CFA (approx. US$418) for supposed complicity in the theft and illegal sale of gold. In April 2013, Meyomesse’s lawyers succeeded in having his case referred to a civil court for appeal. His case was mired by procedural irregularities and delays.

“After several years of advocating on his behalf, we are delighted that Enoh Meyomesse has been released and the politically motivated charges against him dropped,” said Karin Deutsch Karlekar, Director of Free Expression Programs at PEN American. “We are pleased that the appeals process has been used to ensure justice and we urge the authorities to refrain from using politicized legal charges to punish writers who express dissident views.”

More information about his case can be found here.

PEN International’s statement about his release can be found here.