The PEN/Voelcker Award for Poetry, established by a bequest from Hunce Voelcker, is given to a poet whose distinguished and growing body of work to date represents a notable and accomplished presence in American literature. The poet honored by the award is one for whom the exceptional promise seen in earlier work has been fulfilled, and who continues to mature with each successive volume of poetry. The award is given in even-numbered years and carries a stipend of $5,000. Nominations for this award are solicited from current Professional Members of PEN America in good standing.

All winners and finalists for this award are eligible to receive PEN America’s official winner or finalist seal. If you are a publisher of a shortlisted or winning book for this award and are interested in obtaining the PEN America award seal, please write to awards@pen.org.

From the judges’ citation: “Edward Kamau Brathwaite, born 1930 in Barbados, West Indies, is widely recognized and celebrated as one of the most important writers in all of Caribbean literature. He is best known for The Arrivants, Born to Slow Horses, and History of the Voice, among others. His works include numerous books of poetry, a wide body of scholarly and critical studies, and two plays. He was the co-founder of the Caribbean Artists Movement (CAM).

He has worked in the Ministry of Education in Ghana, and taught at the University of the West Indies, Southern Illinois University, the University of Nairobi, Boston University, Holy Cross College, Yale University and was a Visiting Fellow at Harvard. He is Emeritus Professor of Comparative Literature at New York University. He has served on the board of directors of UNESCO’s History of Mankind project since 1979, and as cultural advisor to the government of Barbados from 1975-1979 and again since 1990. Kamau Brathwaite was the 2006 International Winner of the Griffin Poetry Prize for his volume of poetry Born to Slow Horses. His other awards include the Neustadt International Award for Literature, the Busso Award, the Casa de las Americas Prize, the Charity Randall Prize for Performance and Written Poetry from the International Poetry Foundation. He has received Guggenheim and Fulbright Fellowships and a grant from the Ford Foundation. Originally trained as an historian at Pembroke College, Cambridge and the University of Sussex, Professor Brathwaite has written a number of studies of Black cultural life both in Africa and throughout the African diasporas of the world in works such as Folk Culture of the Slaves in Jamaica; The Development of Creole Society in Jamaica, 1770-1820. His History of the Voice which studied how African carryovers into Caribbean rhythms have transformed the European tongues the slaves were forced into using enabling the record of distinctly local experience leading to national language, established Brathwaite as the authority of note on ‘nation language.’

His poetry, for which he is most famously known, is in his words ‘an interior journey into the history and culture of ourselves.’ It seeks to articulate the devastations of the lived legacy of the Middle Passage and the need to restore the generative fabric of African heritage. He rediscovers the continuance of African traditions in the New World and makes order from his own viewpoint rather than the European perspective. The primary character of the work is the insistence on the poem as language springing from a sung rhythm, in the spirit of the oral tradition. He gives voice to the people he lives among, to the point in his later work where he invents a typographic statement of the vernacular.” Rites of Passage, according to Simon Gikandi, is a poem “in which oral languages take revenge against institutionalized poetic forms.” Publishers Weekly noted in a review of Slow Horses (2005) that Brathwaite’s work is ‘omnivorously synthetic, insistently local, sinuously syncopated and consistently exciting.’

As such an important and foundational figure in New World writing, the judges are honored to give the PEN Voelcker Award to Kamau Brathwaite.”

Kamau Brathwaite is best known for The Arrivants, published in 1973, as well as The History of the Voice, Born to Slow Horses, and Elegguas. 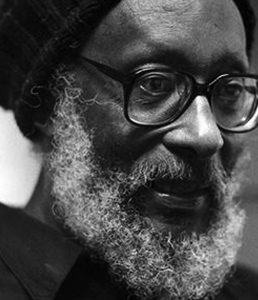