“Being a Writer is a Matter of Doing”: A PEN Ten Interview with Yoon Ha Lee 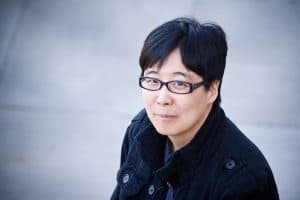 1. How does your identity shape your writing? Is there such a thing as “the writer’s identity”?
When I started writing science fiction and fantasy, I mostly wrote about Western characters and settings because that was what I had grown up reading. Several years ago, I read a number of discussions of diversity in literature on LiveJournal and came to the realization that I didn’t have to be boxed in like that. (I’m a little slow on the uptake!) That was when I started writing stories influenced by my Korean heritage and the fact that I lived in South Korea for nine years.

I suspect “the writer’s identity” varies hugely from writer to writer. For me, what it means is that writing is, at the moment, the profession I’ve chosen. Being a writer is a matter of doing. I noodle at stories all the time; I’m always open to an idea walking in and taking up residence in my head.

2. In an era of “alternative facts” and “fake news,” how does your writing navigate truth? And what is the relationship between truth and fiction?
The presence of “fake news,” or propaganda if you’d rather, hasn’t changed how I approach writing and the question of truth. For that matter, it’s not like propaganda or lying about what’s going on is a new phenomenon—try reading Caesar’s The Gallic Wars.

I’m a professional liar, by which I mean that I make stuff up for a living. But this is only the surface level. Fiction is often not about literal truth, but about metaphorical or emotional truth. It is through fiction we tell ourselves the emotional truths about life and living, from birth to death, from friendship and love to betrayal, from madness to mercy.

“Fiction is often not about literal truth, but about metaphorical or emotional truth.”

3. Writers are often influenced by the words of others, building up from the foundations others have laid. Where is the line between inspiration and appropriation?
It’s about acknowledgment. At this point in time there’s no such thing as a story sui generis. Just by participating in the human experience, you are influenced by others’ stories. However, some stories are special to certain communities, and it’s important to use them with respect (if at all), and to acknowledge your debts.

4. “Resistance” is a long-employed term that has come to mean anything from resisting tyranny, to resisting societal norms, to resisting negative urges and bad habits, and so much more. Is there anything you are resisting right now? Is your writing involved in that act of resistance?
I’m afraid that any resistance in my life is almost accidental. My Machineries of Empire trilogy is space opera featuring a revolution against an entrenched dystopian police state. I didn’t write it as a statement about current politics—most of the books were drafted during the Obama Administration, when the political climate in the United States looked much sunnier!—but simply as a desire for a backdrop for a larger-than-life story of heroes and villains.

In a way, I think that stories that are not explicitly about revolution, such as escapism and comfort reading and lighthearted adventures, are almost a more important form of resistance in times like these. I’d like to do more writing along those lines. Breathing hope into the world is never a bad thing.

I can’t really say that I’ve struggled on the free expression front, in any legally meaningful sense. Certainly there have been times when my modes of expression were restricted by social convention or school or workplace standards, but that’s a different kettle of foxes entirely.

6. What’s the most daring thing you’ve ever put into words?
My first novel, Ninefox Gambit, had two characters that imperfectly and metaphorically expressed the experience of being a trans guy—a woman, and the male ghost who shares her body with her. This was not conscious or intentional, although it seems obvious in retrospect. I was too terrified to have done any such thing. I’d spent most of my life closeted because it wasn’t safe to be out. To be honest, I haven’t actually stopped being terrified.

7. Have you ever written something you wish you could take back? What was your course of action?
Of course I have. I’ve made my share of blunders, and sometimes I know to apologize, and sometimes I don’t realize I’ve screwed up until much later. I’m human, and trying to do better. Perhaps that’s all one can do.

On the story front, I often regret stories for saying only imperfectly what I wanted to convey. But this is part of the truth of writing. There will never be perfect communication between writer and reader. This is a myth. Every reader brings their own history to the story, so one can never fully predict what their experience will be. I just try to improve for future stories, because once something’s published, you can’t erase it from history.

8. Post, stalk, or shun: What is your relationship to social media as a writer?
I keep a casual blog on Dreamwidth and occasionally post on Twitter, but the latter is mostly cute cat pictures and funny writing anecdotes. I try not to spend too much time on Twitter, especially on heavier topics. To be honest, I’d get more done if I deleted my Twitter account entirely, but my publicist would like me to keep it for promotional purposes!

9. You have a background in mathematics, and have spoken about finding inspiration for your science fiction in math and linguistics. Can you speak more about what inspires you in those fields and the methods you’ve developed for weaving all of your interests together in story form?
Mathematics is the language in which the universe is written; it’s a fundamental for art and science and technology, although not the only one. I’m not Rudy Rucker or Greg Egan; I don’t tend to put literal math into my fiction, and a B.A. in the subject doesn’t get you far in any case. What I like to express is something of the feeling of what it’s like to perform a proof, or to discover a mathematical truth, that soaring architectural sense. One way to write a story (not the only way!) is to structure it as a proof, with a point to be made and the other elements of the story leading to that point. That’s something I learned while doing problem sets as an undergrad!

As for linguistics, I’ve always loved noodling at languages, and as an undergrad I experimented with constructed languages (you know, like Elvish or Klingon or High Valyrian) as a hobby. It turned out to be too much of a timesuck to sustain, but I’ve never regretted what I learned. Not every story lends itself to realistic handling of linguistics, of course. My sister made me take out one character lecturing another on historical linguistics in Ninefox Gambit because it was, well, out of character for him to have that background. But when I’m constructing a fictional society, especially in a secondary world, I often think about what kinds of lexicon items they might have or not have, whether their languages have formality levels like Korean or Japanese, whether they have plurals or articles or the same tenses that we do in English. I may not discuss these matters explicitly, but they inform the way I frame the story and its cultures.

It’s also important to remember the sense in which language is a form of magic, in the sense that everything is built on metaphors. A great book that goes into how this works in English is Metaphors We Live By by George Lakoff and Mark Johnson. It was really eye-opening how many basic expressions in English are fundamentally metaphorical in nature, and how pervasive this is.

10. If you could require the current administration to read any book, what would it be?
I’m not sure homework reading always has the intended effect! I mean, when they assigned me Tess of the d’Urbervilles in high school, it made me vow never to take another literature course. (I have kept this vow.) But if they were willing, I’d suggest Kahlil Gibran’s The Prophet for its compassion and lyricism.