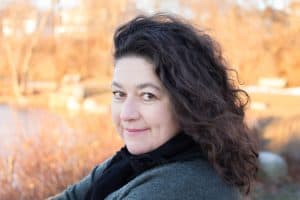 The PEN Ten is PEN America’s weekly interview series. This week Hafizah Geter, PEN Ten guest editor and editor at Little A from Amazon Publishing, speaks to Susan Bernhard, author of Winter Loon, published this month by Little A.

1. How does your identity shape your writing? Is there such a thing as “the writer’s identity”?
My parents liked to tell a story of taking me in for prekindergarten cognitive testing. The woman conducting the test asked, “If lemons are sour then what is sugar?” and I said, “fattening.” For the better part of my childhood and early adulthood I probably identified as being fat as much as anything. It shaped how I presented myself, how I allowed others to treat me. Since 1997, I have identified first as a mother. In April of 2006, when my mother was dying, I was all daughter. Today and probably since November of 2016, I identify as a woman above all else. Being a writer is a facet of who I am but I still don’t identify myself that way, at least not foremost. Everything I bring to this moment—that fat girl, the baby of a family dominated by a patriarch, wife and mother, adult orphan—all of that informs my writing but those experiences are my own, not part of any collective identity. We bring our past selves to the writing table, boxes for the unpacking.

2. In an era of “alternative facts” and “fake news,” how does your writing navigate truth? And what is the relationship between truth and fiction?
If you get right down to it, “alternative facts” are lies and “fake news” is simple denial, a brush-off. That’s the opposite of what most writers are building toward or, maybe better, digging for. I have to say, though, I’m not certain I believe in an absolute truth either. I’m interested in what’s beneath the surface, in exposing the protected belly, in motivators and drivers. Facts are provable, truths are held, like beliefs. Perception is more interesting to me—how we see a set of facts through the lenses of individual experience. Smart, caring, intelligent individuals can look at the same information, shove it into their perception grinders, and come out with a belief system completely different from the person next to them. Religion and politics are perfect examples. Fiction gives us latitude to work with perceptions and expose deeper truths for consideration and examination by the reader.

“I’m interested in what’s beneath the surface, in exposing the protected belly, in motivators and drivers.”

3. Writers are often influenced by the words of others, building up from the foundations others have laid. Where is the line between inspiration and appropriation?
Appropriation is such a loaded word and I’m not sure anyone wants to read what a 50-something white woman has to say on the subject. But I do have thoughts on inspiration. I read poetry, listen to music, stare endlessly at paintings. In this art, I sometimes hear or see flecks I can pinch between my fingers. These bits might be an irritation—sand in an oyster—that I coat and coat or maybe some beautiful color or word to tumble around until I find a connection between its essence and the words I’m trying to get on the page. It is the work we do around the arresting piece that is likely the dividing line between inspiration and appropriation.

4. “Resistance” is a long-employed term that has come to mean anything from resisting tyranny, to resisting societal norms, to resisting negative urges and bad habits, and so much more. It there anything you are resisting right now? Is your writing involved in that act of resistance?
I grew up in a house dominated by an overbearing father. It took time for me to understand how that shaped my thinking about myself and my place. One good that has spawned from this reckless, thoughtless administration is women rising, coming into their own, finding their strength and voice. I think about awe-inspiring women in my life, what they’ve overcome. It’s empowering to watch them move through an alive and awake world. So the act of resistance for me is partly liberation. I’m allowing myself to speak my mind, to share thoughts I used to quiet, to live in a body I have not always loved. I think about the opening lines of Mary Oliver’s poem “Wild Geese”—“You do not have to be good./You do not have to walk on your knees . . .” I’ve become aware of the way women apologize as a way of introducing an idea, as if we must walk on our knees to the podium. So I try to own my moments and to elevate other women as an act of resistance and illumination.

5. What do you consider to be the biggest threat to free expression today? Have there been times when your right to free expression has been challenged?
I’m not sure I can speak to what the “biggest” threat is but I do think the internet’s signal-to-noise ratio poses a threat to meaningful dialogue. Social media gives everyone a microphone and it’s up to the individual to filter the noise out. But by self-selecting, we end up in feedback loops perpetuated by platform algorithms that reinforce our existing biases. I find myself exhausted by the process of filtering and rage, and by the fear that one misplaced word will invite venomous attack. If we succumb to that, all we’re left with is retreat and we don’t advance critical thought.

6. What’s the most daring thing you’ve ever put into words?
After the Kavanaugh hearings, I was so offended, so triggered by Dr. Blasey Ford’s detractors who insisted they knew what she would remember and what she would not, based on their own experiences or suppositions. You didn’t ask whether I shared this writing—I didn’t. But, in a cathartic act of personal daring, I committed to paper my own experience with rape, the details I remember and the lack that has been lost to time or pressed and sealed into the corners of memory.

7. Have you ever written something you wish you could take back? What was your course of action?
I was pretty lost for a while in my early 20s, full of self-pity, self-loathing, and doubt. I used to keep notebooks of bad poetry and late-night thoughts. But I was so embarrassed by my own writing, so fearful that my own truths would be discovered, that I destroyed all of them. I couldn’t risk being found out. I regret that now. As much as it might be painful to relive, I’d like to look into those thoughts now to try to understand that young woman better, to continue to understand who I am now.

8. Post, stalk, or shun: What is your relationship to social media as a writer?
I like the way social media creates a space to forge connections and I value so many of the writers and friends I’ve made online. I’ve seen incredible outpouring of love online that spills over into real life. I’m thinking specifically of a writer friend whose child passed away earlier this year. Her Facebook community of readers stepped into that grief and supported her and her family in countless and generous ways. But, to build that community, she had to open herself up completely and that’s not something everyone is comfortable doing. It’s a matter of privacy and how much of ourselves and our time we’re willing to share. As a writer, I gravitate more toward Twitter and that sort of information sharing and support. The dark side of Twitter—triggered, toxic, quick to pounce—I could do without. I’ve been pretty willy-nilly about my engagement so far and I do think I’m going to have to develop some kind of code for navigating social media going forward.

9. Can you tell us about a piece of writing that has influenced you that readers might not know about?
I met the writer and professor William Kittredge years ago in Missoula, Montana. I’d moved away from Montana by then and was working on a thesis for a minor in American Studies from the University of Maryland. I was doing research on the mythology of the American West and Kittredge was kind enough to welcome me into his home to talk about literature. This was right before the popular anthology The Last Best Place that he edited along with his partner Annick Smith was published. We talked at length about truth and mythology, about how too often we act as tourist not just in the places we visit but in the way we meet people and absorb culture. I think I kind of fell in love with him that day. I picked up a copy of Owning It All, his collection of essays on living in the West which introduced me to writers I so admire like David Long, Marilynne Robinson, and Louise Erdrich among others. In it, he talks about writing the “emotional truth” of a lived Western life. He writes that “. . . the West had more compelling stories than those of simpleminded gun-play, that the private lives lived in the West were worth writing about just as any life is worth art if, in seeing it through the eyes of the artist, we are helped to see our own life with renewed clarity.” That conversation and that collection set me on a path toward writing and publishing Winter Loon.

10. If you could require the current administration to read any book, what would it be?
My first thought was to recommend recent novels like The Power by Naomi Alderman or Red Clocks by Leni Zumas. But I don’t want to give “the current administration” any ideas. And while I have doubts that anything will sink in, I think I would go with How To Be A Good Creature: A Memoir in 13 Animals by Sy Montgomery in the hope that an impoverished, wizened heart might be cracked open.

On History, Self-Censorship, and Bravery: A PEN Ten Interview with Wayétu Moore