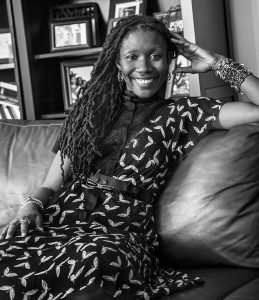 The PEN Ten is PEN America’s weekly interview series. In this week’s interview, we speak with Nicole Dennis-Benn, winner of this year’s Lambda Literary Award for Lesbian Fiction for her novel Here Comes the Sun. Dennis-Benn was born and raised in Kingston, Jamaica.

I actually try hard not to let writing inform my sense of identity. I find that it is important to separate the two identities, though much of my work is informed by varied personal experiences or social issues that affect me deeply, which I want to unpack in my works. Given that the appreciation of literature (and any art form) is highly subjective, it would be devastating for an artist’s or a writer’s sense of self to be determined by it.

The women who raised me. I was always an inquisitive child who would eavesdrop on the conversations of grown women at home and in my community in Vineyard Town, Kingston. I was privy to stories whispered over zinc fences and on verandas, accompanied by foreshadowing hums of a favorite hymnal to drown out the weight of such tales.

I’m obsessed with art. If I weren’t as self-conscious, I would’ve tried painting. Or photography. I just love the way artists speak through their art on a canvas. I’ve always wanted to do that with my words. If only words were colors. This explains my other obsession, which is reading. I’m a voracious reader for that reason. It helps me to color.

Writing women’s sexuality. Many people shy away from that in literary fiction. However, I find that if we’re writing human beings, it’s important to write them as sexual beings as well. Black women have always been looked at as matriarchs and/or maternal figures in fiction and in reality. There is danger in that which feeds into the strong black woman myth. I think it’s important to write against that myth by daring to show us as human beings.

I write in my home study. It’s decorated with books I love, and photographs of people and places I write about.

I believe that writing can change the world. The world will be a better one when we can come to the table without judging each other or dismissing each other based on perceived differences. We are inclined to think that if someone doesn’t look like us or is of another culture and religion, then they’re different from us. At the end of the day, we all desire to be seen, heard, and loved as human beings. My job as a writer is to humanize people on the page—to challenge readers to transcend their own understanding of the world and of groups of people to empathize with them.

Writing is lonely. However, there are times when I find collective efforts helpful. For example, I was recently a part of a House of SpeakEasy event with Mira Jacobs, Brendan Kiely, and Jason Reynolds. As writers, we were asked to speak to a theater full of high school students about who we are as people. Witnessing the awe and glee on the students’ faces was enough to let me know that as writers we’ve done something worthwhile.

One of my favorite books, The Bluest Eye by Toni Morrison, was once a banned book. So was The Color Purple by Alice Walker. Both books changed my life and gave me permission as an artist to create. To think I was almost deprived of them makes me sad. I don’t believe in censorship for that reason—especially if there is no emotional or mental harm to an individual. I understand that in our society, especially now, there are hateful people who have agendas to perpetuate their ignorance and hatred using words. Like I said before, as artists we have a responsibility to dispel ignorance by spreading empathy.

No, I’ve never been arrested and hope never to be. When my wife and I got married in my home country of Jamaica, a local pastor said we should’ve been prosecuted. We were appalled that such an act of love could incite such hate. Luckily that pastor had no such power to throw us in prison for loving each other!

I would recommend Edwidge Danticat’s masterpiece, Create Dangerously: The Immigrant Artist at Work. This would hopefully remind those in power that as artists, our job is to not only ruffle feathers, but to preserve truths in our works.