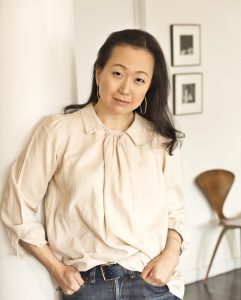 In this week’s PEN Ten, Lauren Cerand, co-founder of the PEN Ten interview, speaks with Min Jin Lee, a finalist for the 2017 National Book Award.

I wrote and published essays in The Korea Times when I was in high school. Many years later, I quit being a lawyer to write full-time. However, neither early publication nor quitting a career made me feel like a writer. I began to feel like a real writer when I started taking evening writing classes at the 92nd Street Y in my late 20s and early 30s, because I met other adults who were serious about craft and were willing to disrupt their lives to learn it.

In college, I wrote and published essays about feminism, educational reform, and identity politics. I recall taking some flak for my views. However, later in life, I found it much tougher and riskier to write about my illnesses and failures.

I think it is advisable to censor oneself from harming others unnecessarily. Not everything should be said or written. I don’t mind if you disagree, but I find meanness untenable. That said, I do not believe that governments should censor the press—the bulwark of a true democracy. Lately, what I find alarming is that rather than just censoring information or ideas (limiting/blocking), oppressive governments are disseminating false ideology and lies through purportedly legitimate news channels, creating a nearly impossible environment for individuals to discern the truth and to behave appropriately.

For me, it is to observe carefully and to think deeply about what I see, then and only then to record my impressions fairly and accurately. Whether in fiction or nonfiction, I want to be a fair and emotionally truthful writer. Also, I think I should tell a story worth the reader’s time and attention.

For what it’s worth, I would send leaders of repressive regimes The Drama of the Gifted Child and For Your Own Good by psychoanalyst Alice Miller, and gosh, maybe some good texts by pediatrician and psychoanalyst D.W. Winnicott. If I could, I’d send along a talented therapist.

The PEN Ten with Lauren Cerand

...Salman has stood for most powerfully for the values of PEN America -- a body of work that has questioned founding myths and expanded the world's imaginative possibilities, at great cost to himself. On a personal note, as a writer whose own work is fundamentally shaped... 3/4