The PEN Ten: An Interview with Daniel José Older 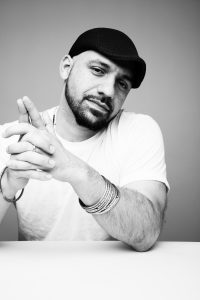 1. What was the first book or piece of writing that had a profound impact on you?
It wasn’t the first, but I always remember this moment as a kid when I was reading The Fellowship of the Ring, and it was pouring rain in the book, that part when they’ve just left the Shire, and I looked up and was shocked to find it was actually a sunny day in the real world. The story had completely enveloped me—what magic!

2. What does your creative process look like? How do you maintain momentum and remain inspired?
Some of it is just that I deeply enjoy writing. It’s not something I take for granted, because I know a lot of writers hate the process. But I’m creating story, finding words for it, watching it all come to life — it’s so joyful to me. So on a writing day, I’ll wake up, walk the dogs, have breakfast and then get to it. If it’s a time I’m not feeling very connected or focused, I’ll make a point of settling in slowly to the work. I’ll sit through an entire song or give myself some time just to wander through the story beats before I jump in. It is a sacred process, storytelling, and it can be helpful to be intentional about transitioning into it. Editing, on the other hand, is pure hell.

3. How can writers affect resistance movements?
As many great thinkers have already said, we have to envision the change we want to see in the world in order to bring it about, and that is the work of writers, of storytellers, of mythmakers. Activism, resistance work, organizing—all requires imagination.

“Whatever that story is you’ve been dying to tell, tell it! Don’t convince yourself that the world won’t let you tell it and then give up before you’ve even begun.”

4. What is your favorite bookstore or library?
Ah there are so many great independent bookstores — a few of my favorites: Tubby & Coos, Octavia Books, Garden District Bookstore, and Community Books, all in New Orleans. In Brooklyn, I love Greenlight, Word, and Books Are Magic. All libraries are magical, special places so please support them. I visited one in Barcelona, in the Raval, that used to be a military hospital and it still had that great vaulted ceiling and gothic feel and I often remember it.

5. What is the last book you read? What are you reading next?
I just finished the stunning, gorgeous Clap When You Land by Elizabeth Acevedo. She is such a tremendous writer — all her work brings tears to my eyes and this one is no exception. What is consistently terrific about Acevedo, besides her skill with language, is that she can alchemize a weighty, grief-filled topic into something somehow joyful without sugarcoating it or pretending everything is alright. A remarkable storyteller. Next up — Resistance Reborn by Rebecca Roanhorse. I can’t wait! She’s one of my favorite new authors and I am obviously a huge Star Wars nerd.

6. What advice do you have for young writers?
Whatever that story is you’ve been dying to tell, tell it! Don’t convince yourself that the world won’t let you tell it and then give up before you’ve even begun. I can understand the impulse — society does often have a way of preventing important stories from getting out there. But the truth always finds a way through, and the way the world changes is by challenging systems we once believed unshakeable.

“There is no more powerful force in our armory than story.”

7. Which Latinx writers working today are you most excited by?
Ah there are so many amazing ones these days — what a time to be a writer or reader! Elizabeth Acevedo, Sofia Quintero (who also narrates the audio version of The Book of Lost Saints), Ibi Zoboi, Zoraida Córdova, Claribel Ortega, Isabel Quintero, Nina Varela, Vita Ayala…just to name a few!

8. Which writer, living or dead, would you most like to meet? What would you like to discuss?
Homer! The Iliad was probably my first favorite book, one of the first great fantasy novels, and it has shaped my writing so much. I’d want to talk worldbuilding and about the balance of divine magic and gritty war details, but I’d settle just for having a cup of coffee and shooting the shit with him. If Homer was a him — who knows?

9. Why do you think people need stories?
Stories are how we process the world, how we heal when we are broken, how we find freedom when it’s been wrenched from us, how we make sense of trauma and joy, how we overcome and fight back, how we learn who we are. There is no more powerful force in our armory than story.

10. What excites you most about the literary moment you’re writing in?
We are very much in the midst of a bona fide literary movement. Writers are changing the world by changing the bookshelf, and it’s a glorious thing to see and be a part of. I’m so proud to count the many amazing truthtellers out there among my peers, and I’m so honored to be able to do my part in this change. Miss Toni Morrison once called for a writers movement that was pugnacious and militant and I believe we’re closer to answering that call than at any other moment in my lifetime.

Daniel José Older is the New York Times bestselling author of the young adult series The Shadowshaper Cypher, the Bone Street Rumba urban fantasy series, the middle-grade historical fantasy series Dactyl Hill Squad, and Star Wars: Last Shot. He won the International Latino Book Award and has been nominated for the Kirkus Prize, the Mythopoeic Award, the Locus Award, the Andre Norton Award, and the World Fantasy Award. Shadowshaper was named one of Esquire’s 80 Books Every Person Should Read. You can find his thoughts on writing, read dispatches from his decade-long career as an NYC paramedic, and hear his music on his website, YouTube and on Twitter.

“Find your truth and tell it:” A PEN Ten Interview with Etaf Rum

The PEN Ten: An Interview with the 2019 Writing for Justice Fellows

The PEN Ten: An Interview with Rivers Solomon

The PEN Ten: An Interview with Nicole Chung

Upside of having OUT OF DARKNESS banned in Leander ISD: being part of this 9/28 BANNED BOOKS event with @cltomlinson (FORGET THE ALAMO) and PEN America's @jzfriedman on 9/28. Critical narratives are under attack in Texas, but we won't be silenced. Join us!
https://bit.ly/2VM8x0p

Shout out to @PENamerica for sharing our message of transforming our criminal legal system with client-centered public defense! Listen to full episode here: https://anchor.fm/penamerica/episodes/The-Promise-of-a-Robust-Public-Defense-Plus--Dallas-Literary-Community-e175nj0

In this week's #PENTen interview, @stevenreigns, author of A QUILT FOR DAVID, shares insights on how he maintains momentum and remains inspired as a writer, what surprised him during his process of writing and research, and more: https://bit.ly/3Cieulj.