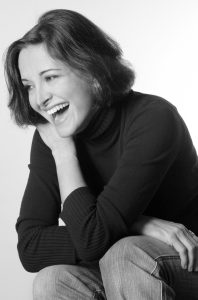 The PEN Ten is PEN America’s weekly interview series. In this week’s interview, we speak with Carmen Agra Deedy, author of The Rooster Who Would Not Be Quiet!, a children’s book—illustrated by Eugene Yelchin—about a rooster who insists on singing despite the mayor’s no-singing laws. Deedy discusses young readers, surveillance, and the use of humor when confronting difficult realities.

In my late 20s. It was then that I first realized how much time I devoted to thinking, writing, or talking about stories. Either I was an artist, or I needed to see an analyst. As most writers know, it’s cheaper to write.

A Faustian bargain; I’d have to give up my own voice in the process. But I’d take just a pinch of Dorothy Parker’s wit, Jane Smiley’s prose, Art Spiegelman’s courage, Umberto Eco’s storytelling, or Khaled Hosseini’s humanity.

I cannot remember a time when I did not love stories.

When I was 17, I dared to tell a brutal teacher what I thought of his methods, and made him laugh, despite himself. I find it difficult to speak or write hard truths without an underpinning of humor. I am often reminded of George Bernard Shaw’s words: “If you are going to tell the truth, you’d better make them laugh—or they’ll kill you.”

To take every injurious word, every moment of heart-stopping wonder, every slithering fear, every joy you have ever experienced, and create something that will make the rest of us believe that this imperfect and sometimes brutal life is worth living.

And that one singular life may decide the end of the story.

And of the writer of children’s books?

To respect the intelligence of young readers and never, ever, lie to them. They will love you for the former and crucify you should you ignore the latter.

At the home of a dear friend near Mount Timpanogos in Utah; her house is as remote as an eagle’s aerie and admits no cell reception. It is purest heaven.

While the notion of the public intellectual has fallen out of fashion, do you believe writers have a collective purpose? Do the writers of children’s books?

Our collective purpose (certainly as PEN Members) is not only to demand the right to free expression for ourselves, but to extend that demand to include those with whom we deeply disagree.

In The Rooster Who Would Not Be Quiet!, you write of a rooster who sings despite laws that forbid singing. It is a story, written for children, of a character who defies censorship. When, if ever, is censorship acceptable?

I’ve thought about this, but everything I come up with feels like the thin edge of the wedge.

Observation can be benevolent.

Surveillance, at its most benign, is stalking.

The Origins of Totalitarianism by the controversial and brilliant Hannah Arendt. But would a leader so threatened by words open a book with this title? It seems to me it would read too much like an unflattering autobiography.

What book would you send to children living under government censorship?

The paucity of picture book material on censorship was no small motivation for the creation of The Rooster Who Would Not Be Quiet!.

The PEN Ten with Deborah Smith