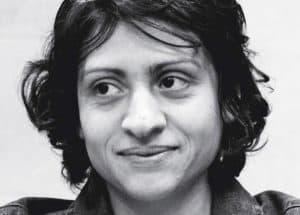 The PEN Ten is PEN America’s weekly interview series. In this week’s interview, we speak with Basma Abdel Aziz, a writer of novels, short stories, and nonfiction. Her latest novel, The Queue, received a 2014 English PEN Translates award and was published in English by Melville House in 2016. In this interview, Aziz discusses her early political writing while in medical school, getting arrested in Cairo, and The Old Man and the Sea.

Well, I started writing a very long time ago. Like everyone, I wrote my diaries and some poems in school, but writing short stories and wanting to write and publish articles started to inform my sense of identity when I went to secondary school. My preferred tool for expressing my ideas became writing articles. Later on, as a student in medical school, I continued writing every week in the journalism area (a place where students were allowed to showcase their writing after taking a responsibility agreement). Although I rarely got permission to publish my political and human rights articles, I kept breaking the rules, distributing the papers carrying my words everywhere so that others could read and discuss. My words were enough to get me punished, banned from entering the facility for weeks. Since then, becoming a writer has turned out to be much more inspiring to me than becoming a psychiatrist.

I can’t say, because I never felt I wanted to be someone else or doing something else or write in a different way. I also believe that the best has not been written yet, and this what keeps me working harder, trying to catch it.

The continuous search for freedom by all means constitutes my major obsession, so different forms of oppression and manipulation, which are practiced by dictatorships and authority figures to control people, touch me deeply and influence my writing. Also, looking into buried issues and disclosing vague meanings are other obsessions that influence me. Perfection is always one of my obsessions that is never satisfied. It pushes me sometimes toward foolish behavior. I remember that a few years ago, after the 2011 Egyptian uprising, I was working on one of my nonfiction books, focusing on the police violence against citizens, and it was such a seductive idea to interview the imprisoned vice minister of interior to figure out a psychological approach to systematic violence. This was extremely dangerous to think about, but I searched for his lawyer and visited his office after he agreed to receive me. I gave him a series of questions to deliver to the imprisoned minister, and I waited weeks for the answers, but the lawyer didn’t contact me like he had promised. I tried calling him dozens of times, but he either wouldn’t pick up or would hang up when he did. I wanted my study to be perfect, but this was impossible and would have driven me into a serious situation. The man is now set free—he received no sentence for torturing thousands of people. My book documents what happened when he was in charge.

That would be my diaries, which are not published yet, and which I doubt I will ever dare to publish .

I have no fixed place to write. I don’t even have an apartment. I used to carry my paper and books and pens and ride my car to the club or to a quiet cafe or to my family’s house in Alexandria just on the Mediterranean Sea. The last is my preferred place, but it’s not easy to get to, as my daily governmental work is in Cairo.

I believe it is to bring questions to the minds of readers, raise doubts, and open more doors.

No, I don’t believe writers have a collective purpose, but I hope to.  I assume that writers need to have not a collective purpose in its narrow meaning, but in its wide one—to keep committed to the principles of humanity; to defend major positive values like dignity, justice, and freedom; to avoid becoming a tool used by authoritarianism.

I don’t accept the presence of censorship. I prefer to leave the final judgement to people when talking about writing. Censorship has a bad reputation in my community; it is usually used for political reasons, sometimes reasons related to the religion and its authority figures. Anyway, it brings an adverse reaction. Every banned piece of writing and every hidden piece of information becomes more and more seductive to acquire and read. Nowadays, it is so very difficult to impose a traditional kind of censorship or to prevent people from using the available technological tools to overcome it.

Yes, I was arrested when I was a student in my last year of medical school. I was the organizer of a small demonstration held in front of the U.S. Embassy in Cairo to support Palestinian rights. Once we started chanting for Palestinian people, the security forces captured us and we were transferred to Kasr El Nile police station.

There was a second time, the day the American war against Iraq began on March 20, 2003. An officer called my name while I was on my way to join demonstrations and arrested me in Tahrir Square. I was shouting, and some friends heard my voice and came to liberate me. A struggle began between my friends and the officers, and I was then able to escape. I left Cairo that day to avoid detention orders. The next day was Mother’s Day and I spent it far from home instead of celebrating my mother.

I would send one of the classics like The Old Man and the Sea. I am in love with this book. It describes life away from politics, but, for me, it is not only about the eternal struggle between man and nature, but also about chasing an idea, a faraway dream, trying hard to realize it on the ground no matter the price, no matter the obstacles. It unfolds in a marvelous way, with the man chasing his wish to the very end despite having nothing to fight with. This is the same as it is with imprisoned writers, who have no weapon except their words and who go after their dreams of a just world, ready to pay the price.

In regard to Arabic literature, I would send a play written by the preeminent Egyptian thinker Tawfiq El-Hakim called The Bank of Anxiety. This play is a black comedy that deals with words as an actual currency that is used instead of dollars or euros. Two desperate men decide to open a bank in which people can put their anxiety in words and withdraw it from the founders at the same time. It highlights the importance of words and the great influence they have, whether written or spoken. It has this satirical take on the state’s surveillance of people, with this bank being used to follow the clients and their political attitudes.

The PEN Ten with Kristen Radtke

The PEN Ten with Amanda Johnston