The PEN Ten with Alex Berenson

In this week’s PEN Ten, Communications Director Sarah Edkins speaks with best-selling author Alex Berenson, whose newest novel, The Prisoner, will be released today with a dedication to PEN America and all the writers around the world jailed for their words.

After my junior year in college, I went to Texas to work as a copyediting intern for The Dallas Morning News. I tried to convince the metro desk to let me write articles in my spare time. One was about a man who’d been shot and killed in a rural town southeast of Dallas after trying to rob a store. The owner hadn’t been charged; he was white, and the thief was black, a career criminal who had just been released from jail. A routine case in Texas then and now. I remember going to the police station to ask what had happened and see a copy of the police report. Yes, the chief told me, that old boy was shot in the back. He’d been killed weaponless and a few feet outside from the store, running away, a detail that hadn’t made it into any of the stories or local television reports.

I wrote the story and the Morning News ran it. Nothing came of the article; I went back to college 1,500 miles away and couldn’t follow up. Even if I had, Texas law, written and unwritten, protected the shooter.

But the experience made me realize that someone had to ask questions, to try to watch the watchers and the men with guns.

I have lots of interests but I don’t know that I have many obsessions. I’d like to think I have a flexible mind, but maybe I’m just too inconstant or inconsistent to give all my energy to any one problem or idea. The Internet has probably worsened that tendency.

A biographical play about David Foster Wallace that explicitly questions whether he’s a great writer (and begins with him coming onto the stage immediately after his suicide from hanging and explicitly addressing the audience).

One of the back rooms at our local library; it has a scratched wooden desk and two sagging chairs and I’m usually the only one in it.

Tricky question. Nonfiction writers—reporters of all stripes, historians, biographers—have to start and end with the truth as their lodestar. The truth is a painful master. It blinks and hides, disappears entirely, then reappears as a straitjacket; you may say this, not that, and this you’ll never know at all. I know firsthand why so many reporters wish to leave it behind.

But I don’t believe in creative nonfiction by any name, except maybe in memoir, where it is as unavoidable as memory (did that police chief in Texas really say, that old boy was shot in the back? I don’t know and have no way of knowing). To do anything else is to ease slowly down a path that ends in fire and brimstone if you’re lucky and libel suits if you’re not.

Fiction writers have less responsibility. And more. A novel can provoke, teach, inform, irritate, amuse, illuminate relationships, surprise with language … but ultimately it must entertain. No one has to read fiction. And the novel that doesn’t keep its readers engaged with its characters and story and turning pages will not be read long.

For novelists: God no. Nothing’s more solitary than the act of fiction writing.

For nonfiction writers, yes, the groping human search for truth.

Obviously, sometimes military or quasi-military intelligence operations sometimes need to be kept secret before and while they are happening—though I think that secrecy should generally not extend after an operation is complete. The people who’ve been targeted know they’ve been targeted, after all (unless the mission has failed completely, and in that case it may be worthy of discussion for other reasons).

The explosion of social media has also put the right to personal privacy under pressure; doxing—the release of stolen or hacked health or financial records, emails, or photos—is a very dangerous trend. Merely saying that the criminal, civil, and ethical responsibility falls on the perpetrator obviously doesn’t work; communications channels like Twitter and Reddit must make efforts to be sure that they aren’t being used maliciously. At the same time, I don’t think they can be put in the position of adjudicating every tweet or post that comes up, and as a practical matter, doing so is impossible. And in some cases personal information, even if illicitly obtained, is relevant. We’d want to know if a scientist doing research on the potential dangers of cell phone radiation had secretly gotten money from Verizon, for example. The law and the media are struggling to balance all these competing forces, and I think the struggle’s going to continue for a while.

I have never been arrested, but I have been Tased (in 2004, as a New York Times reporter, at a conference on “non-lethal weaponry”) by executives from the company who were not happy with stories about them and Taser that I’d written.

They made sure they gave me a nice loooong shock. It hurt.

Fascinating question. The obvious choice is 1984, right? The hell of a repressive regime. But I fear that the average dictator would see it more as a how-to guide. I think I’m going with science fiction, The Naked Sun, Asimov’s classic about a murder on a planet where each human lives in almost total isolation, served by tens of thousands of robots. It works as both mystery and science fiction, and ultimately it ends with a reminder from Asimov that human beings—no matter how wealthy, powerful, and protected—need each other.

Plus, it’s not even 200 pages. I doubt most dictators have much of an attention span. 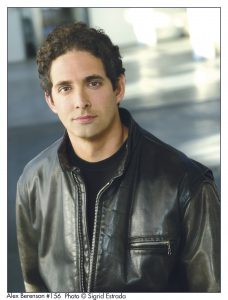 As a reporter for The New York Times, Alex Berenson covered topics ranging from the occupation of Iraq to the flooding of New Orleans to the financial crimes of Bernard Madoff. His debut, The Faithful Spy, won the 2007 Edgar Award for Best First Novel. Berenson graduated from Yale University, and he lives with his family in New York’s Hudson Valley.

For this week's #PENTen interview, we speak with Jocelyn Nicole Johnson (@jocelynjohnson), author of MY MONITCELLO, about her relationship to place and story, her criteria for crafting a stellar sentence, and more: https://bit.ly/3aG6WNs.