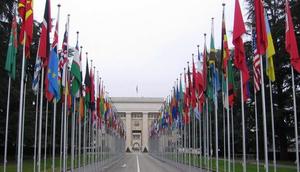 PEN American Center submitted a list of recommendations about privacy and free expression to the UN Human Rights Committee, which is currently reviewing the rights record of the United States in Geneva. In particular, PEN highlighted how bulk government surveillance has induced a worrying rise of self-censorship amongst writers identified in our report Chilling Effects, and we noted the international campaign Writers Against Mass Surveillance launched by leading PEN members that garnered 200,000 signatures worldwide. PEN has fought for reader privacy—and against government surveillance—since the rapid passage of the USA PATRIOT Act in 2001.

The UN Human Rights Committee is an expert body that reviews the compliance of states with the International Covenant on Civil and Political Rights, the first of two international treaties that are sometimes called the international “bill of rights.” The experts, who serve limited terms, may receive submissions from member states and from civil society organizations. In turn, they issue concluding observations to participating states. The right to privacy is covered under Article 17 of the Covenant.

The Human Rights Committee has underscored the importance of free expression (covered under Article 19 of the Covenant) for some time. Indeed, its General Comment No. 34 on States parties’ obligations under Article 19, adopted in July 2011, served as a foundational text for PEN’s Declaration on Digital Freedom, which outlines PEN’s position in the digital age on the targeting of individuals, censorship, surveillance, and business and human rights.

The full text of PEN’s submission follows below.

1.    PEN American Center welcomes the opportunity provided by the United Nations Human Rights Committee to comment on the climate privacy and free expression in the United States. In particular, PEN will comment on the right to privacy (article 17) as presented in paragraph 22 of the List of Issues.

2.    PEN American Center is deeply troubled by the implications of bulk government surveillance by U.S. intelligence agencies both in the U.S. and overseas. PEN has challenged government surveillance in domestic courts beginning with the enactment of the USA Patriot Act in 2001. Since then, we have championed reader privacy and fought to challenge the Foreign Intelligence Surveillance Act at the U.S. Supreme Court, among other legal fora.

4.    Rather, rights violations including the use of secret detention facilities, torture and other war crimes, and sweeping surveillance programs have all come to light through the work of whistleblowers and journalists determined to subject these activities to public scrutiny and review. Too often, their revelations have been met not by official action to investigate and rectify the violations but by threats and legal retribution against the whistleblowers and journalists themselves.

5.    It is a fundamental right, not only of citizens of the United States but of citizens throughout the world, to access information about serious human rights violations in any country. And it is a protected right of every individual and every writer anywhere on earth to disseminate information about such violations wherever they occur. PEN stands with all who seek to expose violations of international human rights and humanitarian law, and deplores efforts by the United States government to prosecute as spies and traitors those who strive to bring its human rights violations to light.

6.    As an organization dedicated to preserving free expression and creative freedom, PEN is particularly troubled by recent revelations concerning the nature and scope of electronic surveillance programs currently in use by the United States’ National Security Agency. As leaks about the U.S. government’s PRISM program and other such programs make clear, the government now possesses the capacity to monitor the private telephone, internet, and other digital communications of every citizen on earth—among them, the communications of PEN’s 20,000 members worldwide. The right to privacy is protected under Article 17 of the International Covenant of Civil and Political Rights to which the United States is a State Party.

7.    PEN American Center’s September 2013 report Chilling Effects: NSA Surveillance Drives U.S. Writers to Self-Censor clearly documents that one in six writers in the U.S. are self-censoring in light of U.S. government surveillance, proof of the undeniable chilling effect on freedom of expression of these policies.

8.    We are equally concerned that the government has not significantly reformed the three primary sources of authority that enable spying on writers and individuals in other countries, specifically section 215 of the Patriot Act, section 702 of the FISA Act, and Executive Order 12,333.

9.    The cross-border implications of bulk surveillance practices were affirmed by the petition Writers Against Mass Surveillance, which garnered over 500 signatures from professional writers, including five Nobel Laureates, and 200,000 signatures worldwide.

10.    The indiscriminate, dragnet monitoring of private communications ignores the concept of presumption of innocence and violates basic due process requirements including individualized suspicion. Such monitoring, coupled with new data mining technologies, enables the wholesale profiling of individuals based on their private, expressive activities. Moreover, when such surveillance is conducted across borders, it creates a situation in which citizens have their private lives and thoughts exposed to the judgment and review of governments over which they exert no influence or control—and against which they have no capacity to defend themselves.