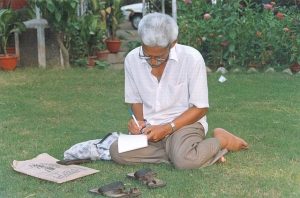 P. Varavara Rao is a renowned Indian poet, literary critic, and political activist. Regarded as one of the finest Marxist critics in Telugu literature, Rao has been frequently targeted by government authorities for his political opinions and has spent most of his adult life in and out of prison.

Rao was first jailed amid the ‘Emergency’ in 1975, during which the government of Indira Gandhi arrested political dissidents en masse to curb unrest. Over the course of the next decade, Rao was subject to public harassment, police beatings, and repeated attacks by government mercenaries, so much so that in 1985, fearing for his life, he elected to cancel his bail and return to prison, where he remained for the next three years.

During his time in prison, Rao developed a powerful political identity, allying himself with the leftist Naxalite movement to speak out against the country’s shift towards economic liberalization during the 1990s. Most recently, in August 2018, he and four other human rights activists were arrested and charged with conspiring to assassinate Prime Minister Narendra Modi in what has been seen as an attempt to silence their political speech. He remains in custody and faces ongoing legal action.

Over the past five decades, successive governments have attempted to deprive Rao of his right to free expression. He has been charged in over 30 separate court cases and survived countless attempts on his life. Frequently barred from reading or writing in his native Telugu, he has seen his poetry burned before him and his correspondence from prison seized by government authorities. Yet, Rao continues to write, refusing to allow the Indian government to define his literary legacy. His wife and family ask free expression advocates around the world for support in securing his release from arbitrary detention.

Detained during the novel coronavirus pandemic, Rao has suffered grave medical maltreatment. At age 79, the poet tested positive for COVID-19 in state custody. He was then transferred to three separate hospitals in a single week. At Nanvati Hospital, Rao was found with a head injury. He is thought to be in critical condition, but his family is unable to visit him or receive updates about his condition. They have only received information through secondary sources.

Join PEN America's @VilkViktorya & @iHollaback for a Bystander Intervention Training, co-hosted by @wearehearken, where we’ll equip you with the tools you need to intervene safely & effectively when you witness online abuse on 10/21 at 12PM ET! Register: http://bit.ly/2FD2jYk.

In our #WhatToExpect2020 Behind the Decision Desk panel discussion, @jennagiesta spoke about what @CNN has observed in voter turnout this year alongside panelists from @AP and @FoxNews. Watch the full video at https://bit.ly/37acRKa.