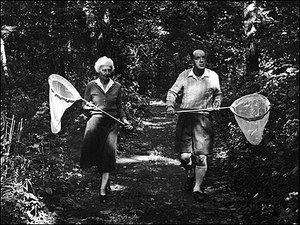 And less than six inches from me and my burning life, was nebulous Lolita! After a long stirless vigil, my tentacles moved towards her again, and this time the creak of the mattress did not awake her. I managed to bring my ravenous bulk so close to her that I felt the aura of her bare shoulder like a warm breath upon my cheek. And then, she sat up, gasped, muttered with insane rapidity something about boats, tugged at the sheets and lapsed back into her rich, dark, young unconsciousness. As she tossed, within that abundant flow of sleep, recently auburn, at present lunar, her arm struck me across the face. For a second I held her. She freed herself from the shadow of my embrace—doing this not consciously, not violently, not with any personal distaste, but with the neutral plaintive murmur of a child demanding its natural rest. And again the situation remained the same: Lolita with her curved spine to Humbert, Humbert resting his head on his hand and burning with desire and dyspepsia.

A tremendous amount of drama is enacted in the starred firmament of the Amazon customer review, and sometimes I get my kicks from reading feedback on the classics. The criticisms of Lolita that I find incomprehensible are the ones that call it boring: one-star reviews with titles like “Wake Me When It’s Over” or the (unwittingly Nabokovian) “Pretentious dribble.” Say that Lolita is hilarious and excruciating and sad—no novel ever had a sadder last line—but not boring, surely. We throb with the miserable Humbert as he creeps across the expanse of sheet. We excoriate him; we pity him and the unlikeable, defenseless Lolita. Sensations and smells and scenes come alive. If it is dribble, it is divine dribble.

There are people who, with remarkable unity of perception, see this book as one thing and one thing alone. These are the book-banners, the people who write reviews with titles like “Repulsive” or “Horrid Pedophilic Mess.” And if we apply some rubric of total justice, utterly lacking from human experience, to our art forms, it is probably true that it is grotesque to celebrate a book about a pedophile in a world where real pedophiles are the horror behind every AMBER Alert, every heartrending photograph in the post office.

In the face of unwavering moral absolutism I would stammer that this is a novel about art, not about a pedophile. Nabokov himself dispatched with critics more crisply, writing in 1956, “That my novel does contain various allusions to the physiological urges of a pervert is quite true. But after all we are not children, not illiterate juvenile delinquents…” He told us also in that superb essay that “a work of fiction exists only insofar as it affords me what I shall bluntly call aesthetic bliss…All the rest is either topical trash or what some call the Literature of Ideas, which very often is topical trash coming in huge blocks of plaster…”

Lolita is a novel about art and language, and judged on those terms it is unassailable. It is an exhibition of a uniquely talented person at the zenith of his powers—an American novel, by a Russian, writing in his third language. And yet the reader never feels she is spectator to a feat of sport-writing, some private challenge to write beautifully in a foreign tongue on an ugly subject. By that vulgar formulation, Humbert seduced Lolita under her anxious mama’s nose for the challenge of it all. No, to write this novel, to love a nymphet, you need some compulsion of the blood. It takes “an artist and a madman, a creature of infinite melancholy, with a bubble of hot poison in your loins and a super-voluptuous flame permanently aglow in your subtle spine.”