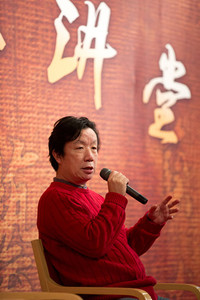 Zou Jingzhi is one of China’s most acclaimed writers of plays and screenplays, with his own theatre company and high-profile film collaborations with Zhang Yimou and Wong Kar Wai. While he may appear to be an establishment figure, there is a shadow over his past that is only occasionally visible – the marks that the Cultural Revolution left on him forty years ago, as it did to so many of his generation.

When I visited Mr. Zou in his Beijing villa, he spoke of the past dispassionately, even while showing me photographs of the hardship he and his wife suffered when, as ‘Educated Youths’, they were sent away from the city to the Great Northern Waste, where they were used as forced labour for many years.

Yet his experience was only part of a much larger story, one that the country as a whole has yet to fully explain or exorcise. Even today, there are many aspects of the Cultural Revolution that it is difficult to completely understand, and the changes that it wrought on China are still being accounted for.

While much of Mr. Zou’s writing deals with antiquity – for example his adaptation of the classical Chinese epic ‘The Orphan of Zhao’ – he has not, until now, closely examined his own past. ‘Nine Buildings’ works through what he witnessed and suffered as a child and young man, all the while retaining his customary spare, elegant prose and detached vision.

Told in fragmentary episodes, ‘Nine Buildings’ gradually builds up a picture of a society at war with itself, from the perspectives of first an unwitting child watching established hierarchies unravel around him, and later a young man trapped in a rural community that has nothing to do with him, and the boredom and sheer waste of life he must endure here.

Apart from the history itself, this book explores memory and growth. How much can Mr. Zou truly remember, at this distance of time? What details have stayed with him, and how much has he changed as a result of these experiences? An unforced, discursive meander through these years creates an evocation of the time far more telling than a straightforwardly chronological narrative.

Chinese writing that deals with the Cultural Revolution is generally known as ‘Scar Literature’ – and is usually, as the name implies, laden with blame and anger. Mr. Zou’s book, I would argue, does not belong to this genre. His account is personal, and while the larger political context is always present in the background, he shares with us only what he saw and did, and in so doing demonstrates the resilience of the human spirit – how a person can, in a time of great turmoil, carve out a life for himself that successfully navigates the terrible contours of this time, and finds worth and beauty in the most surprising places.