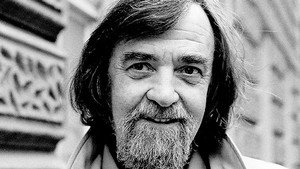 The inspiration for Worm-Eaten Time has come about as a result of great serendipity and to my great joy. In 2001, during the Prague Summer Seminars, I had the chance to do a bilingual reading with Pavel of translations from his collection, Paperbound Poems (Brožované básně), at one of their public events. I’d known Pavel for almost a decade; we met in Prague two years after I left New York to teach in a small elementary school in Southeast Bohemia and I had already translated some of his work for an American literary magazine. After the reading, Pavel handed me a signed copy of the book, as a token of thanks – this generous act, from my experience, so illustrative of Pavel’s way of being. For years I kept the book and when I was looking for a new project after my first full-length translation, The Old Man’s Verses, this book seemed the natural choice because of my profound respect for Pavel as a person and an artist.

As a collection, I was drawn to Paperbound Poems because of its linguistic complexity as well as its cultural, literary, and political import. This collection is comprised of the poems Pavel wrote in samizdat edition during the time his poetry had been banned by the Czech authorities. The poems were passed in carbon copy from one friend to the next as a means to circumvent the censorship that had forced many of Pavel’s friends and colleagues to leave Czechoslovakia for good. Ivan Diviš, whose work I had already translated, and a friend of Pavel’s had already opted for exile in Munich in the face of his work being banned. But Pavel had chosen to stay and for ten years, he wrote no poetry, not because of the authorities had threatened him; in the normalized winter, he no longer could understand its significance and meaning. The emergence of these poems after a decade of silence attests to the endurance of the imagination and Pavel’s liberation from his self-imposed exile in the metaphorical ghetto. They also function as his personal testament to a terrible time in Czech history. Although the political context of these poems is important, what I love most in these unofficial poems is their incredible intimacy; the tension between their profound tenderness and the dark, ironic humor, conveyed with Pavel’s idiosyncratic use of Czech language that he pays homage to in the work – nonsense rhymes, neologisms and master wordplay that he hurls like a wrecking ball against the ghetto’s wall to knock the iron monolith down.

Yet, the conception of Worm-Eaten Time came almost a year after I’d begun translating Paperbound Poems. In 2009, I was in Prague helping Pavel translate his bibliography as part of his application for the Hans Christian Andersen Prize. Pavel is a renowned children’s writer and his book, The Odd-Sock Eaters (Lichožrouti), had been nominated for this prestigious award. On the list, I noticed a collection, published in 1969, called Worm-Eaten Light (Červotočivé světlo). It amazed me that Pavel had been able to publish a collection after Soviet invasion and I asked him if I could get a copy; without saying a word, he took a slim volume from his shelf and handed it to me, one of his two personal copies of a book that was, at that time, out of print. Reading these poems, written in the six-month period after the Soviet tanks rolled into Czechoslovakia, from August to December 1968, was a complete revelation. They were so deeply lyrical, their power conveyed in free verse and the beauty of the imagery that clearly resonated in spiritual communion with the likes of Eliot and Celan – Pavel’s “Survivors” and “Countryside with a Coat of Arms,” variations on Eliot’s “Wasteland.” The prosody of these more cosmopolitan international works stood in stark stylistic counterpoint to his later more playful and linguistically idiosyncratic verses of Paperbound Poems that seemed so deeply Czech.

When I asked Pavel about how such a book could be published after the Soviet invasion, he told me that the book only stayed on the shelves two days before it was summarily stripped from them. It was the recognition of his and his country’s fate that caused Pavel’s voice to descend into silence, the moment he realized that he could no longer freely express his ideas poetically because the ghetto walls had shut around him. I realized then that this collection and Paperbound Poems were thematically connected to each other – metaphorical bookends in Pavel’s development as a writer – that the powerful metaphor of worm-eaten could be extended from his country’s fall into darkness to embrace the entire period of normalization that ended, not with eternal winter, but with the resurrection of Pavel’s poetic consciousness from the utter silence and its complete transformation through the slow machinations of normalization –  the worm-eaten time.  I can’t express the joy that reading and translating this work has given me. But the greatest gift I have found through this process has been when Pavel, after reading my translations of Worm-Eaten Light, thanked me for the homecoming; in forty-years, he hadn’t been able to return to the work because of its deep emotional significance. It’s my hope that everyone will experience the liberating power Pavel’s work to come home to the power of poetry to liberate us all.