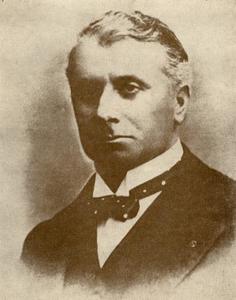 Untranslatablilty draws me to translate Mateiu Caragiale’s 1929 novel, Rakes of the Old Court. One of the central texts of Romanian literature, its singular, impossibly ornate Romanian weds so well to its decadent subject that asking the work to embrace English seems a betrayal, like begging it to break a solemn vow. Fortunately, adultery is completely consonant with the many depraved themes the book presents.

To imagine the atmosphere of the book, we may start with the author himself. Dressed in a green frock, buttoned shoes, cape, and bowler hat, with his mustache waxed, face lightly powdered, and head held aloof, Mateiu Caragiale (1885-1939) stood out from the crowd on the streets of Bucharest, a Symbolist decadent lost in a Balkan capital. A poet and author of three novels, Mateiu is referred to by his first name, to distinguish him from his father, the highly influential comic playwright, Ion Luca Caragiale. His illegitimate son, Mateiu was raised on the periphery of his family and surrounded by writers and actors, company which may have helped him to learn affectation. He had a passion for heraldry and noble titles (a drive many critics attribute to his family background), which lead him to include descriptions of escutcheons and blazons in his works, where they blend with his already highly ornamented writing. His books (including the fragment of a detective novel) describe characters of uncertain ancestry, airs of fog and mystery, and plots of decadence and abasement. He is a self-conscious inheritor of Edgar Allen Poe, whose atmosphere he expands into a definition of Balkan identity. While he enjoyed a few, fanatic supporters during his lifetime, Mateiu suffered from his lack of readers, always too few in comparison with the broad appeal of his father’s plays.

Mateiu’s most successful novel, Rakes of the Old-Court attempts to encapsulate a vision of the Balkans, depicting a world of corrupt nobility, a Bucharest built on the ruins of an ancient castle, one which only housed failed leaders. Despite its pessimistic surface, the work moves its reader with its nostalgia for ruins, its sympathy for vulnerable, lost personages. Four characters move through Bucharest houses, bars, and brothels, drinking and gambling among tragic characters and intriguing antiques. The book is prized above all for its ornate style, filled with archaic Romanian and saturated with Turkish, Rroma, and Greek vocabulary. The novel’s style provides ample demonstration of the complicated history of Romania, a nation at the crossroads of dead empires, the Ottoman, Russian, and Austro-Hungarian. All this complexity flows through the serpentine, opulent sentences, glittering in conflicting linguistic inheritances. The text resembles the turtle, in Huysmans’s À rebours, that Esseintes covers in jewels—the novel is a melancholy, reptilian world, lavishly ornamented in language.

Rakes has enjoyed both underground and official success. During the strictest Communist-era control of literary life, Rakes was read, memorized, and even re-enacted by small cliques of “Mateists.” His lush descriptions of ambiguity and secrecy provided contrast with and relief from the oppressive, bright optimism of Socialist Realism. While it received some scholarly attention under Communism, the book and author would have to wait until after the events of 1989 to gain canonical status. Both Mateiu and his father’s works then enjoyed tremendous popularity, even spawning a political party. During the 1990s, Mateiu’s work became required reading in high schools, and in 1995 Rakes was made into a film. In 2001, a poll of over one hundred literary critics chose Rakes as the best Romanian novel ever written.