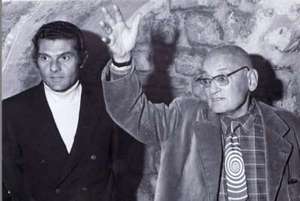 I became acquainted with Jean Ferry through his most famous story, the thrice-translated “Le tigre mondain,” praised by writers from founding Surrealist André Breton to modern American horror master Thomas Ligotti. The place is Paris; the time, entre-deux-guerres. Mesmerism, beauty, barbarism’s foppish veneer: these converge in Ferry’s ostensibly straightforward account of an unusual music hall number, where for a moment, in the lurid theatrical light, all civilization seems to hang by a thread. The short but potent piece also proves Ferry one of Kafka’s lost children. I thought: here is an author who unites disparate readerships, surely of use in our niche-fractured literary landscape, where readers divided by camp and interest can be reunited by quirk and quality, eccentricity and excellence.

Luckily, the tiger was just the tip of the iceberg. Beggars formed from garbage, bird-anglers fishing from hot air balloons, travel fantasias from Defoe to Calvino, satires of bureaucracy, Shangri-La in a Welsh miner’s kitchen, gemlike prose poems, dramatic monologues of long-suffering, long-simmering existential menace… Ferry’s fortes were among my favorites: oneiric explorations, a felicity for detail, dilettante wit, inimitable (and often very verbal) Gallic whimsy, not to mention that singular halo only obscurity bestows, which the years merely burnish. His involuted logic charmed, as did his dashes of dread and absurdity, equally deadpan.

Great men admit they were wrong; great writers close on notes of defeat. What endeared me most to Ferry was his passion for fatigue. Any concordance of The Conductor will show this to be the collection’s foremost sentiment, even villain, lurking in stories to surface in the surrender on which so many of them end. If sheer weariness has ever terrorized you more than physically, almost spiritually; if it has, as Peter Handke wrote in his great “Essay on Tiredness,” ever “denatured the world around” you, then you will find in Ferry a kindred soul. Literature has always made much of death and eros, but exhaustion—linked to sex by la petite mort—is no less a mortal force, perhaps even more of one; a daily, rather than definitive, reckoning it was Ferry’s peculiarity to plumb. He did so by championing the petty, the niggling; his querulous, everyman narrators are so pitifully beleaguered, so easily dizzied by paradox, so universally beset by the inexpressible, that their final capitulations amount to a new gray in the spectrum of fatalism, somewhere between what John Gardner called Vonnegut’s “shrug” and Beckett’s exhortation to “fail better.” This unrelieved panic, these professions of impotence, somehow manage to be ironic and heartfelt, dismissive and plaintive—as Santayana said of life, “tragic in fate and comic in existence.”

One glamour of translation is the exercise of taste, the choice of whom to exhume. In case it isn’t clear, I love to ferret out the forgotten and neglected: secret masters, one-hit wonders, frustrated gurus, Bartlebys, enemies of promise, wastrel talents. Ferry, in his time, was the most prominent scholar of another overlooked oddball, the visionary Raymond Roussel, whose contemporary cult fame owes much to Ferry’s early exegeses. Perhaps fittingly, his interest in Roussel foreshadows his own eclipsing. But if the master was sui generis, the acolyte is similarly unclassifiable. In his story “Raymond Roussel in Heaven,” Ferry delivered his hero at last unto that glory so wholly deserved and devoutly desired. My translation is meant as no less an homage.