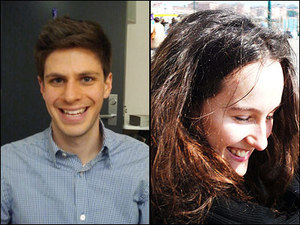 Dagmara Kraus’s debut poetry collection, kummerang, is an exuberant investigation of a linguistically charged mind. The poems in kummerang refuse to decide whether they will speak through sense or music, instead pushing the two to race in tandem at accelerating speeds.
Kraus takes her reader on an intense, rollicking ride through the musical cadences of the German language, a test run to its phonetic limits, with detours into regions of anagram, neologism, and cultural-linguistic crossover. The titular poem—which takes as its name a neologism combining the word for sorrow or distress with a boomerang (kummer + bumerang = kummerang)—careens through sonic and emotional landscapes that are, by turns, playful and menacing, lyrical and sorrowful. Along the way, the poem touches down to visit Genghis Khan’s Mongolia, Mary Poppins’ melodies and the Polish language, before moving on, ever restlessly.

kummerang plunges fearlessly into a space where syntax, sound, echo, and association direct the movement of thought. The poet’s mind engages the world around it, but even more than the world, the poet’s mind engages its own language, which acts as the organizing principle providing shape, tone, and whatever clarity of meaning will be discovered. Intense and unexpected melodies drive poems that connect the personal/emotional and the cultural/mythic. Kraus herself presents a figure worth watching: a young female immigrant from Eastern Europe (Poland, specifically) writing innovative poems that press the established canon, not for a disruption, but for an expansion.

kummerang/gloomerang is an essentially hopeful project by two young poets intent on carrying the German language’s unique sonic and imagistic powers of expression into English. It is an optimistic game of cultural and linguistic sharing, a raucous banging on the door of language as we know it. Because sound and linguistic exploration play a vital role in these poems, I pursue less-traditional strategies, such as homophonic translation and anagram translation, for some poems in the collection. In these cases, I exchange faithfulness to the sense-meaning of the original poem for fidelity to the meaning of its sound or its linguistic investigation. By pursuing these strategies, I hope to translate the spirit and vivacity of the original work into English—and I hope that gloomerang will bend and stretch English the way that kummerang bends and stretches German.

In translating kummerang, my goal is to assume the position of a synapse between two literary nerves: the common linguistic heritage of the English and German languages, and the cultural overlap between the German and English literary canons. I hope to build a bridge similar to those built by translators of Rilke, Mann, Brecht and Goethe, and through it, to add to that shared space.