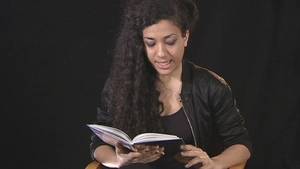 Jennifer Hayashida is the recipient of a 2013 PEN/Heim Translation Fund grant for her work translating Athena Farrokhzad’s Vitsvit. Read an excerpt of her translation of Farrokhad’s work here.

I was born in Oakland, California and raised in Åkersberga, a suburb of Stockholm. My father was Sansei, a third-generation Japanese American born and raised in Honolulu who relocated to the mainland in his late teens in pursuit of stardom as a rock drummer. My mother came to the SF Bay Area as an au-pair in 1965, intending to spend a year there but remaining more or less tied to the place since. I am an only child, and due to the nature of my parent’s transnational marriage, I spent summers in the sunshine state and my academic year in the welfare state. I was one of a handful of non-white kids at my Swedish school—the others were frequently Chilean refugees or Korean adoptees—and growing up I had access to a very limited literary, political, or artistic context for what it meant to be racialized as something other than white. Were I a teenager in Sweden today, I would find tremendous comfort in the intelligent fury of Athena Farrokhzad’s Vitsvit.

In her multi-faceted practices as poet, critic, translator, and educator, Farrokhzad illustrates the relationship of Swedish national identity—the eroding fiction of the Swedish Model—to the diasporic Other, and Vitsvit locates this frequently elided Swedish experience in a globalized and intertextual terrain. However, with narrators who are far from reliable—the assumption of any native informant is quickly upended—the text critiques, even mocks, the notion of an ethnographic or anthropological reading. Instead, we are presented with a rigorously poetic exploration of migration, trauma, and intimacy, and although it may be seen as a document of a particular (immigrant) experience, Vitsvit is above all a work of literature that challenges our notions of Swedish literature in the 21st century.

Global (and domestic) perceptions of Sweden remain wedded to the idea of a largely middle class white population, while increasingly complex racial and economic demographics are the target of xenophobic projects in all areas of society. Such ideological positions are of course most prominently manifest in extreme acts of violence, horrifically illustrated by the 2011 mass murder in Norway by Anders Behring Breivik, yet anti-immigrant parties’ parliamentary representation across the region serve as an acute reminder that hostility towards non-white racial groups is far from a fringe position.

As witnessed in this spring’s “immigrant” uprising in Husby, a Stockholm suburb with a large immigrant population, Sweden is subject to the same globalizing forces and tensions as other industrialized nation states (certainly including the U.S.), and critiques of Swedish exceptionalism demand our attention. Texts by and about non-white Swedes—and especially those that interrogate multiculturalism and the supposedly anti-racist welfare state—need to be available to a global readership, not for any anthropological or ethnographic value, but in order to operate intertextually with kindred works, be they Asian American, Ugandan, Serbian, or Mexican. By creating a mechanism—the translated text—through which non-Swedish-speaking readers can engage with these questions, my hope is to make possible discussions and alliances between critical actors there and elsewhere.

Don't miss our #PENOutLoud event with @PamelaPaulNYT and @laurenoyler on 10/26! Join us for a riveting conversation to launch Pamela Paul's new collection 100 THINGS WE'VE LOST TO THE INTERNET: https://bit.ly/3Aai2Wf.

“We will try to fight to the last moment,” said Hong Kong Journalists Association chairman, Ronson Chan. “But honestly, it’s a gamble. How cruelly will the Beijing government treat us? We know the history of journalists in the People’s Republic of China.” https://nyti.ms/30XCm0k

In this interview, Nobel Peace Prize recipient Dmitry Muratov speaks about the Nobel Peace Prize, journalism in Russia, the growing tendency to suppress the freedom of press, and more: https://bit.ly/3m9JLBH.