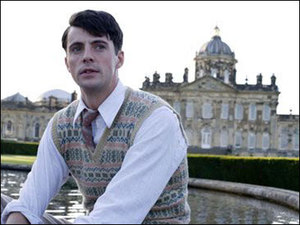 “…I don’t believe Our Blessed Lady cares two hoots whether I put my gym shoes on the left or the right of my dancing shoes.”

You could make a case for a kind of parallel between the events of Evelyn Waugh’s Brideshead Revisited and the fact of it being challenged in Alabama schools for having a “gay protagonist.” With both, the best intentions lead to harm. Lady Marchmain only wants to help her son Sebastian. But clouded by principle, and piety, and tradition, she can’t seem to see what he needs and only increases his unhappiness and speeds his decline. The Alabama legislation that led to the Brideshead challenge was also meant to protect youth from harm and had its roots in principle, piety, and tradition.

It’s silly to point out the particulars of how wrongheaded it is to challenge Brideshead on these grounds. The author, after all, refers to homosexuality as “mortal sin.” Sebastian suffers for his sin—he can’t find happiness, he is alienated from himself and his family, and Kurt with his pus-filled foot is hardly attractive. Book banning is wrongheaded on principle and even if the idylls of Sebastian and Charles did not come to an end, if Sebastian did not suffer, it wouldn’t change a thing. In fact, in justifying a book by pointing out its themes and defending its virtues, one has in a sense gone over to the other side. Because this kind of reductionist thinking is what a novel, in its essence, works against. “The novel’s only morality, “ Milan Kundera writes, “is knowledge.” The knowledge of a novel is the knowledge of possibility—a possible vision of what human life can be and “where moral judgment is suspended.” A place where the particulars—strawberries and wine in the shade—count for everything.

Charles Ryder, a committed agnostic, undergoes a surprising conversion in Brideshead that’s founded in particulars, in an experiential truth. His love for Julia, in fact his intimacy with the whole Flyte family—Cordelia and her six black Cordelias in Africa, pious Bridey’s support for the conviviality of wine though can’t drink himself, Sebastian’s profound innocence and charm, little talks with Lady Marchmain, Lord Marchmain’s self-imposed exile and return, and the great beauty of their home at Brideshead—makes him in a moment (and maybe only for a moment) believe that “perhaps all our loves are only hints and symbols” of a much Greater Love.

But if, as a reader, you can’t believe this moment of conversion, if Waugh’s vision of religion founded in aesthetics and nostalgia doesn’t make sense, if Julia pales in comparison to her “forerunner,” if Celia’s Art & Fashion and Rex’s Politics & Money don’t “shrivel your bowels,” if something else seems to be bleeding through these pages and it’s not God, then this only shows the slipperiness of a novel’s truth—it’s morality of possibility uncurtailed by ideology—in that sometimes it can not even be contained by its maker.