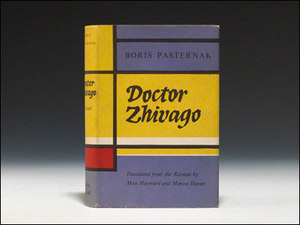 The publication history of Boris Pasternak’s famous novel Dr. Zhivago, a sprawling story of the interlocking lives of people caught up in great historical events of the first part of the 20th century in Russia, is dramatic and well-known. Pasternak wrote the book in the decade following WWII, during the final decade of Stalin’s rule. The first appearance of any material from the book was in 1954, during a brief period of political liberalization after Stalin’s death, when ten poems “by” the eponymous main character (whose poetry plays an important role in the events of the novel) were published in a Russian journal.

Even under Stalin’s successor Khrushchev there was still no realistic hope of publishing the entire book. So in 1957 Pasternak finally allowed a manuscript (including the poems, published as an appendix to the book) to be smuggled out of the country and published in Italian translation. The book was immediately re-translated into many languages and became a world-wide sensation.

In 1958, Pasternak was awarded the Nobel Prize in Literature. At first he accepted the award. However, in the days after the news became public, the forces of the Soviet state were rapidly brought to bear on him and his family: the secret police surrounded his house, his friends and fellow writers publicly condemned him, and threats were made, particularly to his mistress Olga Ivinskaya, who as a result of her association with Pasternak had already once been sent to the Gulag, while she was pregnant with her and Pasternak’s child, who died in the prison camp. When the KGB threatened to send Ivinskaya back to the Gulag again, Pasternak relented, and six days after his first telegram to the Nobel Committee he sent another, withdrawing his acceptance of the award.

I have been thinking about Olga Ivinskaya recently. Though she wrote a memoir, Prisoner of Time, and after Pasternak’s death was sent to prison again, literary historians and obituaries typically refer to her as Pasternak’s “beautiful muse,” and as the inspiration for the main female character in Dr. Zhivago, Lara, whose “theme” many of us can whistle as a result of the famous movie starring Omar Sharif and Julie Christie. Despite her very real existence and activity as a writer, she has become a kind of unreal figure in a mythic drama, whose suffering seems, though it was not, more exemplary than real. Many of the poems of Zhivago are written to Lara, but also seem equally to read as poems written by Pasternak to Ivinskaya. Here, for instance, are the first stanzas of “Autumn,” one of the poems that chronicles the idyllic and fragile time Zhivago and Lara live together in an isolated cabin:

I’ve let the family go its ways,
All those close to me have long dispersed,
And the usual solitude
Fills all of nature and my heart.

And so I’m here with you in the cabin,
In the unpeopled and deserted forest.
The paths and trails, as in a song,
Are half submerged in undergrowth.

Now the log walls gaze in sorrow
At us alone. We never promised
To take the obstacles, if we perish,
We shall do so openly.

We sit down at one, get up at three,
I with a book, you with your sewing,
And at dawn we won’t have noticed
How at some point we stopped kissing.

The fate of the characters in Dr. Zhivago are both epic and ordinary. Here, for example is the famous passage that describes Lara’s fate:

One day Larisa Fyodorovna left the house and did not come back again. Evidently she was arrested on the street in those days or died or vanished no one knew where, forgotten under some nameless number on subsequently lost lists, in one of the countless general or women’s concentration camps in the north.

No more mention is made of her in the book. Coming at the end of this epic novel, after the reader has become so attached to the details of her fate and the fate of the other characters, the dry recitation of these facts has a profound emotional impact, one I still remember from the first time I read the book.

Today, the protagonists in the latest and also very real battle with the Russian state are the women of the feminist collective (and totally killer band) Pussy Riot, who staged a protest against the regime of Vladimir Putin in one of Moscow’s holiest Russian Orthodox churches. After sitting like war criminals in a glass box during what could only be called a preposterous show trial (in the tradition of many such trials, including that of Josef Brodsky on the charge of “Social Parasitism”), on August 17th they were sentenced to two years in prison, but not before releasing extraordinary closing statements. Clearly these are serious and strong young women. I hope and pray they fare well, and that they will be around to speak truth to power for a long, long time to come.