On Alice Walker’s The Color Purple 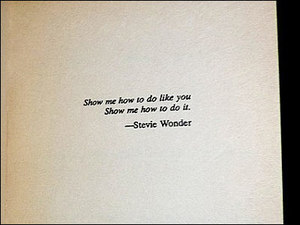 The ban on this book reminds me of the ban on Judy Blume’s Are You There God, It’s Me, Margaret. I very much appreciated the girl-specific content found there that was not sanitized for a health class. I also surely could have benefited from The Color Purple when my hormones were ramping up and I knew boys were expected to enjoy Playboy in bed but had no clue as to what girls were permitted, except to be “lady-like” and modest. The Color Purple is no more “graphic” than what is implied by billboard ads on city streets or overtly depicted on television or in superhero comics (during the “romantic” scenes). Instead, this scene with Celie is female-affirming and instructive in ways that girls, and even a few women, might benefit from:

Listen, she say, right down there in your pussy is a little button that gits real hot when you do you know what with somebody. It git hotter and hotter and then it melt. That the good part. But other parts good too, she say. Lot of sucking go on, here and there, she say. Lot of finger and tongue work…She say, Here, take this mirror and go look at yourself down there…I lie on my back and haul up my dress. Yank down my bloomers. Stick the looking glass between my legs. Ugh. All that hair. Then my pussy lips be black. Then inside look like a wet rose…

I say, Where the button? Right up near the top, she say. The part that stick out a little. I look at her and touch it with my finger. A little shiver go through me. Nothing much. But just enough to tell me that this right button to mash. Maybe. She say, While you looking, look at your titties too. I haul up my dress and look at my titties. Think bout my babies sucking them. Remember the little shiver I felt then too. Sometimes a big shiver….But when I hear them together all I can do is pull the quilt over my head and finger my little button and titties and cry.

Never did telling such an American story raise so consistent an ire as that of Alice Walker’s epistolary novel The Color Purple. The list of school board meetings and library debates conducted over the availability and consideration of this book, especially in relation to the youth across the country, is historical as well as contemporary. Put your finger randomly on a U.S. map. Chances are, the debates carry on somewhere in that state over which aspects of this text deem it most worthy of shelving for “mature” eyes only. The hypocrisy is racial and gendered. In high school, we sat riveted by the jealous, money-grabbing, womanizing exploits of fellows in The Great Gatsby and via Hemingway’s skirt-chasing, bull-running, and hunter protagonists, but when a story primarily about poor black women trying to make their way rears its head, it becomes a target of “worthiness” and “offensiveness” meritorious discussions, seemingly permanently. We live in modern day America where video games and graphic “Law & Order” episodes depict, or at least describe on the daily, some of the most brutal violences we may never have heard of, but this book remains a focal point of contention. Is it the rapes? Dealing with the daily difficulties faced by blacks in a town run by whites and a court system that denies the former’s humanity in favor of the latter? Or could it be the unapologetic homosexuality? “Graphic sexual content?” Learning how to self love? Pick your issue; eliminating this book from most curriculums and libraries, even now, is a cakewalk.

But this novel is no light consideration of such fragmented controversies; they are aspects of a well-wrought story. The Color Purple hit me, a native Georgian like Walker, but on the other side of the proverbial fence as someone who grew up indoctrinated in the ideology of whiteness, with a palpable fear that the book inspires in my kind. This fear is charged by the realities the story brings to light, ones that expose the underbellies of histories long hoped to have been forgotten or pardoned and vacated, even as they are repeated through lore or in the guise of friendly family gestures (“Grandpa’s gonna trade you for the lil pickaninny down the street, you don’t work harder!”). Upon reading Celie’s diary entries and letters, I understood that the myopic, one-dimensional notions I had learned about African Americans while growing up had left me bankrupt in a way that Walker’s novel would not allow. Celie took me through violence hoisted on her and other women she knew and loved, she drew me into the depths of depression and confusion, she charged me with her own efforts away from self pity and towards confidence, she overtly carried me into the arms of a love that “dare not speak its name” without shame and with joy (a feat still treated cursorily or glossed over whereas Walker gave life to lesbian sex as well as deepening it with Celie’s pain: “She say, I love you, Miss Celie. And then she haul off and kiss me on the mouth. Us kiss and kiss till us can’t hardly kiss no more. Then us touch each other… Then I feels something real soft and wet on my breast, feel like one of my little lost babies mouth. Way after while, I act like a little lost baby too.”), and more than a paragraph can encapsulate. However made up Walker’s story may be, I knew that the parts were true for many, including some for myself, and this knowledge deepened my own interrogation of what I had received as well as what I continue to receive in the culture I move in. Celie’s story doesn’t end when the book closes or a library board shelves it in locked recesses. I live in a world that resounds with stories of young girls being raped, experiencing first love, where court systems rule against poor blacks and further commit violence against them. The Color Purple speaks to such events, boldly celebrating some while condemning others. This story’s power lies in its believability and truths; they are perhaps uncomfortably familiar still.

The book continues to be banned, not really for the reasons cited, but because of its affinity with the many realities children and adults alike experience today. In other words, the book might still be too relevant for some; it is no fairy tale and stands as a critique of a country that has advanced in technological terms but perhaps not so quickly via social relations, especially as they echo with unexamined class, gender, and racial strife.

Even today, I meet forms of attempted censorship of the book. Some contend that their children don’t live in proximity to the issues Walker raises, thus it has no bearing—or that the book doesn’t speak to them because it isn’t about them. I reply to those readers, often in my own classes, that they’ll be in for a shock when the bubble they have designed to protect themselves from what their children may or may not know or be able to handle fizzles and fades before their lovely, hopeful faces. If their children can’t process such stories delivered in the medium of this moving story told in diary entries and letters—on paper only—then they are selling their children short and lessening their chances of learning to navigate a very complex and nuanced planet in the process—and they are not developing their empathy muscles. Besides, The Color Purple is a redemption story finally, something we could all use at some point to pull us out of our own ruts, however occasional or different they may be.