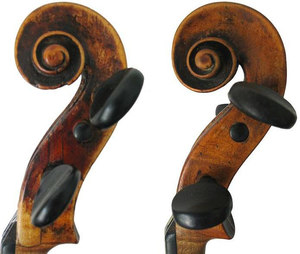 My father played his violin every evening, standing by the upright piano in our dining room. Hearing him play was my first memory, and I can no longer recall if I listened upstairs in my crib, or downstairs in the old wickerwork bassinet my mother wheeled from room to room in our tiny stone farmhouse. There was no face in this memory, only the music, and I had no name for that yet, either. I knew nothing of needles or thread, but I now realize he was stitching a world together note by note, his swooping bow writing memories in an elegant cursive, tying up neatly my earliest recollections with elaborate ribbons of bowed glissandos and pizzicato triplets.

I was a happy baby, my mother later recalled, giggling and cooing and pumping my little arms and legs, merrily conducting my father’s performance, he and I engaged in a duet of mutual love.

My second memory was of crying inconsolably when he traded in his beat-up ‘38 Chevrolet for a new ‘51 Chevrolet sedan. I had loved the older car, or to be precise, I had loved the cozy bed my mother fixed for me in the backseat for the long rides home from Phoenixville every Sunday night after visiting her family. It was always winter in these memories, it seems, and she would lay a woolen army blanket on the seat, plump a pillow for my head, then tuck me in securely. Enshrouded in a cocoon of warmth, I watched the wheeling bars of headlights pass across the inky firmament of the headliner and marveled at the glowing comets of streetlights zooming past the windows, while the soft purring euphony of the tires lulled me to sleep. The next morning I would awaken in my sunny bedroom as if I had been magically transported from a vanished ancient world of night to a wondrous universe fresh with sun and the sound of my mother softly singing in the kitchen.

I soon forgot the old car, and I slept just as soundly in the new one, which had a radio. Now, I fell asleep with the same entrancing lights wheeling by, but with a richer aural accompaniment. Over the baritone drone of the rushing road only a foot and scant inches beneath my prone body, my father’s voice sang along with the songs of his adolescence and young manhood, the prewar soundtrack of his life. I found a sustenance in those sounds, a reassurance that the world was balanced just right, and that I rested groggily at its delicate center, loved and comforted and protected. In those days of ineffectual car heaters, there was often a wisp of frost clinging to the back window, and in my warm, secure cocoon I felt that not only were the thin glass and the bravely-roaring heater repulsing the cold, but so was my father’s singing. And so the years passed until one evening I abruptly announced I was too big to be tucked in like a baby, and that part of my childhood ended.

But memories are as persistent as unwisely-fed stray cats, and a decade and a half later, while lying in the back of another old Chevy—a ‘50 model—I watched passing headlights pinwheel over the torn headliner, and thought of my father home in Pennsylvania, dreaming unimaginable dreams in the once—shared bedroom of our shared youths; the crib and bassinet, paled by dust and reinforced by optimistic spider-webs, sitting empty in the sad attic where memories go to den.

When I was four, my father and his mother—a one-room school teacher—began teaching me to read and write, using a child’s blackboard. I was an apt student, and before I turned five, I was well-set on the endless path of literature. At the age of six, my father taught me chess, insisting that I learn to transcribe our games. The modern algebraic system of notation wasn’t widely-used then, and I diligently registered each move, writing KKN-B3 or KB4 rather than the pithier Nf3 and g4. By the end of a long game, the letters and numerals sprawled down the page in a dense, nigh—indecipherable code that was legible only to us, the proud wizards of the chessboard. He put each score sheet in the corner china closet, and as the years went by, the pile grew until, for no particular reason, I stopped keeping score. Then, because of adolescence or indifference, about the age I was old enough to drive, the games ended, too. One day I noticed the pile of yellowed scores had disappeared, probably thrown away by my mother during one of her rare cleaning frenzies. In the ensuing years, we occasionally played, but the specialness was gone and neither of us kept score.