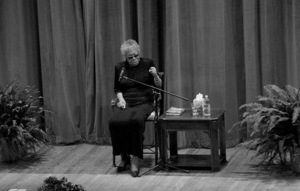 Forty-five years ago, I Know Why the Caged Bird Sings became one of the first twentieth-century autobiographies written by a black woman to reach a wide audience. Today, we celebrate the life of its author, Maya Angelou, who died this morning at age 86.

A chief player in politics for many years, Angelou supported Martin Luther King Jr., Malcolm X, and Nelson Mandela as a civil rights activist, and later backed Hillary Clinton’s presidential campaign. During her life, she used her poetry to promote equality, tolerance, and peace, transcending the segregation, violence, and poverty she experienced as a child.

One of the most influential books written in English, Angelou’s transformative autobiography unleashed the genre of the American memoir to new possibilities. With 39 public bans since 1983 for its themes of childhood rape, sexuality, and racism, the book continues to face criticism, but maintains its position on required reading lists throughout the country.

Regarding her banned books, Angelou said: “I’m always sorry that people ban my books. Many times I’ve been called the most banned. And many times my books are banned by people who never read two sentences. I feel sorry for the young person who never gets to read.”

An icon of free expression, Angelou lived as an artist, teacher, and activist. In a tribute to her late friend Nelson Mandela, she wrote: “No sun outlasts its sunset, but it will rise again and bring the dawn.” Today, her words resound as the world honors one of the most inspirational American female writers of the past century.

At 80, Maya Angelou Reflects on a ‘Glorious’ Life