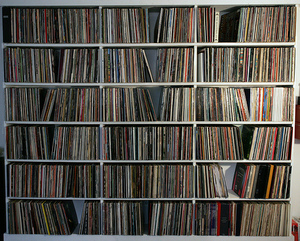 I can’t believe I lost her phone number! Que Menso, it was the most perfecto flirt ever and in the blink of my lovesick third eye, it was gone. I lost it like an expensive break record on ebay.com.

Well to be honest, not all is lost, ese, I just have to find it like a rare gem hidden amongst these stacks upon stacks of STAX 45’.s and FANIA All-Star salsa records that make up iust a proper fraction of my extensive record collection.

You see, Ni Compadre, I am a DeeJay by trade but a bonafide 12-inch record collector, a full-fledged die hard dusty fingered crate digger by habit and I’ll be sent straight to DJ Hell, where all the turntables are belt drive and none of the needles work1 if I can’t find the pinche numero of My Future LP Wife.

This girl, excuse me Mi Nermano, I mean this WOMAN because she definately had the cara de una Aztecan Goddess and the body of a great serpent, all deadly curves just fuming sexuality, had walked into My Music Studio, My Life of seductive samples and dangerous drum breakz, smoked some of Chi-Town’s finest florescent lime green daydreams, disappeared in a cloud of oyster grey smokescreens and left me a clue of love, Un Recuerdo de Amor like in some cheesy romantic tele-novella that I am starring in to One Day find her and sweep her off her Phat-Laced ADIDAS or in this case, make her groove to my hand tailored beatz and like a pendejohead I practically lost it!

Everything started when I was spinning an All 45 Funk Set at the local Hipflbp dive, COATLICUES. There I was feeling “So Fre$h and So Clean” like that song by Outkast, in my zone minding my own business, haciendo la cosa, My Dark Brown Eyez analzing the deep grooves that the tracks make. I think it was a cover of a famoso James Brown and The Flames cut En Espanol, when I looked up Mis Ojos became magnetically attracted to those of A Chicago Chicana Angel standing directamente across the bar from me.

Now, I don’t like to toot my own Mambo trombone or trumpeta, but I am A Ladies’ Hombre and as soon as I became a free-agent on El Market de single Gente I made myself a promise to never chase AMOR. NEVER AGAIN was I going to let El Estupido Cupido make a payaso of myself with a pinche arrow sticking out from my bleeding treasure chest.

If it was True Love, I mean REAL True Love, if The GOd$, those horned and winged Diablos willed it to blossom from My Sacred Thorned Heartbeat then I would use the secret powers of positive thin-king to Man-I-Fest that beautiful reality before they could do it for me.

Anyways, I smiled at her, Miles (Davis) away from Me, swimming and floating in that sea of cream and cafe colored faces, with My gleaming white alligator teeth. I looked down at The 7-inch I had spinning on that Golden Technic 1200 turntable with My Fav. Royal Blue Orafon needle hooked to it and reached into My trusty (Sci-Fi) DJ bag to put on the next track, all too ready to break My own self-imposed Chicano rules on Love & Lust by buying myself another dos minutos de cancion on El Turntable to go over and spark up a convo with her sexy self.

Like The Mystical Mists surrounding an Ancient Mayan Temple, My Dream Angel had evaporated into that ocean of music loverz and fine drink connoiseurs. It was then that I knew she was going to be a stronger addiction than The ONE involving LP’s that I had been cultivating since I Was A Fre$h Man in HIGH Skool.

I thought to Myself that she was just a mirage, some dream lover that My Unconsciousness had created by using All The Memorias I had collected, like the records I bought and traded online, of those mujeres that I had merely tasted OR indulged in who just couldn’t satisfy My Eternal Thirst for The Next ConQuest.

Oh, SHE was All Too Real my friendz and beloved readerz because I tell you she literally bumped elbows with me as we both hunted for those heavenly 12-inch slabs of rotating vinyl wax at our favorito local disco digs, The Rusty Revolver, a semana later.

I took a DEEP breath in, summoning The Courage of 6,000 Incan Warriors sent on a War Party and using my fox-like skillz I gradually began digging through The Record Pilez right next to HER.

There I went, stalking, stealthily, My Brown Fingers like Golden Jaguars on The Prowl:

all The Way up to The N Records and then The Moment I had hoped for happened, Mi Nermano, while The Ironbutterfliez made their nest in the very fibers of My Small Intestines.

We bumped into each other and like Always happens, we both jumped up startled as if we never accidentally bumped into another human being and I said, “Con Permiso…” SHE smiled HER electric smile of fuego at Me, Our Eyez met once Again and My Brilliant Corazon melted my insides like red hot lava flowing from the mouths of newly erupted volcanos causing eternal internal damage.

Quickly I said, “HEY, weren’t you at The Funk Night at COATLICUES last night, I could’ve swore I saw you there?” SHE responded ever SO slightly, HER wordz forming into Ancient Spirits as SHE spoke them, “YEAH, OH $#!T, YOU were The DeeJay that noche! BAD@$$!!!’

“This is GREAT!” I thought to Myself, The Ancients have shown Me The Way into HER stereo heart jukebox, now all I have to do is keep My Love Rhymez flowing long enough to hold her interest and invite her to My Next Show. That’s if I don’t accidentally let her know that I want to be HER futuro LP husband, blend beautifully crafted Mix CD’s with her and raise gorgeous Brown DJ Babiez to help keep Our HipHop Nation Alive & Strong.

If it’s ONE thing I’ve learn’d, and a pedaso of hard earned advicio to all you Future DJ Cupidz and RicoSuaveMentes, NEVER, I MEAN NEVER, let La Mujer de Tus Suenos know how much you want her right off the first song on The Playlist. No Me Imorta if it hurtz yo lil’ heart so much it feels like it’s goin’ to explode, like the over-heated engine of a Convertable ‘57 Bel Air, that’s GOOD! IF YOU KNOW IT, Cool, Be Cool Primoo, like a good party mix let the groovez build up and Up And UP until you play that ONE banger that gets the lugar burning down!

“Simon”, I say casually, “I’ve been doing Sabado Nights there with DJ’s Miraculous & Ambidextrous for a year now, we get some really good head there, I MEAN HEADZ…” Damnit, I Think.

She says, “I know, I’ve seen you there before. YOU SNAP!!!” What?! She’s been going to My Night for awhile Now and I never once noticed HER?! I really am A Menso.

Well come to think of it. I have Always had a dimepiece there with Me to show-off to My DJ Homies, like a record you buy at The 2nd Hand but know it’s worth Way more overseas!

OR Maybe, I had SEEN her before, but only Now that I had nearly given up on LOVE and began to think of Myself as A New Person was I ready to meet La Mujer de Mi Destino?

As I’m about to get lost in My DJ Love Thoughts, SHE grabs a hold of My Harpsichord Heartstringz and Squeezes. SHE asks Me if I ‘Smoke Treez?’

“Of Course, only stuff straight from The Earth…” I tell her, “I like Mushroomz and Mezcal and there was those few times doing Blue Lightening Acid with My Brother out in Aztlan. I got some really KUSH Green-Gold at My Studio, you want to come over and listen to some New Mixes I’m workin’ on?”

She responds slowly with HER Sexy Self, “MOS DEF. let’s do that! Let Me buy our recordz and you buy The Blunt Wrapz. Peach & Blueberry are My Favorites … Hint Hint.”

Ah, A Woman after My Heartshaped Headphonez.

We end up back at My Secret Headquarters. My Musical Laboratory AND A Real Session is Coming together! MARISOL and I are taking turns mixing and scratching on The l’s & 2’s and a few of MY DeeJay friendz are coming through. SHE invited some of Her Homegirlz and we’re chiefing up and the place is getting foggy from all The Tequila Blunt Smoke and steamy from all The DEEP Lowrider cutz we are spinning.

We do Psychadelic Rock, Jazz, LATIN Jazz, to SOUL, THEN HIPHOP Trackz that sampl’d those trackz and we’re having A Blast While Getting Blasted!

We Listen to Jimi, Al Green, Bitch’s Brew, J Dilla … things are going good and I can feel My Seasoned Lungz get filled with The Venomous Blunt Smoke when SOL sayz, “$#!T, LOOK at What Time IT IS! YOU really know how to throw down and show a B-Girl a good time, Homie, BUT I got My Music Engineering Classe manana and A Girl needs her beauty sleep!”

I make a silent prayer to Myself, My God, I have found My SoulMate, but instead I give her a HUGE Hug and Ki$$ on the cheek using Our Mutual Smoke Intoxications as an excuse to cop a real good feel of her beautiful waistline basslines.

As SHE heads to the basement door with Her Homegirlz, I blurt out very unslick-like, “YO SOL, how am I supposed to call you about My Next Night?”

SHE says, “No Problemo, Mr. DeeJay, i wrote it on The First Record I ever bought! YOU do remember which ONE I told YOU right?”

I respond with A Sly Smirk still in My Green Haze, “Yeah, yeah, No Doubt, how could I forget that? Peace, you ladiez get home safely and make sure My Future Wife gets to class on time!”

Damn, did I just say that? They ALL laugh at Me, “HE must Be Stoned…” and dip out the door into The Warm Starry Night.

Now All I Have To Do, Mi Hermano, is remember which record was her first … I remember it had yellow Mountainz on it OR was it an Orange Sun with A Clenched Brown Fist Raised? M Mind is a faded blur The Next Sunny Morning, playing back like a record overworn from ONE too many playz, I guess I’ll just start with A and work My Way up to Z.

One Record down, about 2,500 more to go and you better believe I’m going to find HER numero, Mi Amigo.