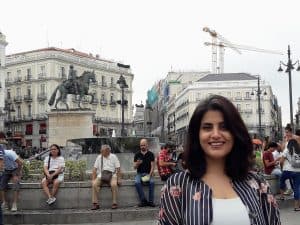 Loujain Al-Hathloul is a Saudi blogger and women’s rights activist. Since May 2018, she has been detained in connection with her writing and activism; the unofficial charges against her include contacting “enemy groups” (e.g. human rights organizations, foreign media), promoting women’s rights on social media, and advocating for an end to Saudi Arabia’s draconian male guardianship system.

While her current detention is the most aggressive measure that the Saudi government has taken against Al-Hathloul, it is not the first time they have sought to silence her. Over the last decade, Al-Hathloul has become an outspoken voice on women’s issues, advocating for reform online and driving publicly before doing so became legal for women. Al-Hathloul had previously been detained in 2014, after attempting to drive into Saudi Arabia from the United Arab Emirates.

“Any Saudi citizen might be upset by some incidents that occur in the Kingdom, but that is only a direct sign of one’s interest in the betterment of one’s own country.”
—Loujain Al-Hathloul,
A Clarification

But Al-Hathloul has remained steadfast in the face of harassment. Despite being subject to inhumane treatment including waterboarding, electrocution, and sexual assault, Al-Hathoul’s family claims that in August, she rejected a deal that would have ensured her release in exchange for denying that she was tortured during her detention.

The ongoing legal process against Al-Hathloul and her colleagues has been marked by restricted access to legal representation and unspecified charges due to “privacy concerns,” raising questions about due process. While six women’s rights activists arrested during the same crack-down were released by the Saudi government in spring 2019, the future is uncertain for Loujain Al-Hathloul.