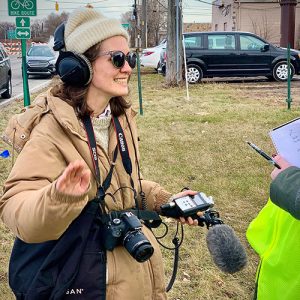 What personal risks have you or your colleagues faced while covering COVID-19?
Shortly after our governor, Gretchen Whitmer, enacted her order to stay home, I reported at a local bus transit center, asking folks why they were out and about. I had on a mask and latex gloves and tried to stay six feet away from the people, but the whole time I felt like I could be getting infected, or be a silent carrier and infecting the people I was talking to. Shortly after I reported that story, our news director said that no story is worth dying for, and we’ve since all been reporting remotely rather than in the field.

“The Census as an issue has been almost completely buried by news of the pandemic. What’s unnerving about that is that Census data is tied to the type of funding that people will need more than ever after this crisis.”

How have the advent of the COVID-19 outbreak and social distancing requirements changed your reporting and the way your newsroom operates more broadly?
On-air hosts still have to go into the station. Before and after we go on the air, we wipe everything down with sanitizer. We also put a disposable cover over the microphone that looks like a tiny shower cap.

When we’re not on the air or producing a show that’s on the air, we’re reporting from home. It’s difficult to report a feature radio story when you can’t go out into the world. I’ve been talking to my interview subjects on the phone and using a special cable or asking them to record themselves using the voice memo app on a housemate’s phone. I’m also using audio from video whenever possible, and I’m adapting my writing a little bit. As for producing the stories themselves, when I need to record narration, I have to sit in my closet because it’s the quietest place in my house. The whole time I’m in there, my poor roommate has to sit still because otherwise there will be sounds of someone walking up the stairs or flushing the toilet in the background of my pieces.

Are there any stories or communities that you feel are underreported in regards to the COVID-19 crisis? Similarly, what non COVID-19 stories have you seen shelved or ignored because of the hyper-focus on the current crisis?
Before the pandemic hit, our station had planned to do a whole series on the Census. While we were able to do some stories ahead of time, and a few during, I feel like the Census as an issue has been almost completely buried by news of the pandemic. What’s unnerving about that is that Census data is tied to the type of funding that people will need more than ever after this crisis.

What stories have you reported on that have given you the most hope?
Two pieces come to mind. The first was a story about a grassroots group of Muslims who very quickly organized a way for volunteers to bring groceries and food to people stuck in their homes. To me, it’s just one example of how the pandemic has resulted in people coming up with solutions and helping each other out.

Secondly, I’m wrapping up a mini-series right now featuring people who contracted COVID-19 but got through it. One of the women I interviewed was high-risk and ended up being hospitalized. She was faced with multiple obstacles along the way but always kept a super positive attitude and is now out of the hospital, and after quarantining, she’s even returned to work.

“If you already know about the magic of public radio, tell a friend who hasn’t discovered it yet. And if you hear something you like, share it on social media. That’s a great way to get other people exposed to the independent, fact-based reporting that public radio is known for.”

What books, poems, podcasts, or other creative media have you been turning to for comfort or inspiration?
I’m a radio person, so you’re going to get a list of podcasts: The Daily, Heavyweight, We Love You and So Can You, Reply-All, How Sound, and Felixity are what I’ve been listening to lately. We also have two really great shows on our station called “Detroit Today” and “Culture Shift,” which, yes my coworkers produce (so I’m biased), but I honestly tune into them daily to get the latest information on what’s happening locally and to feel connected with my community.

What can your readers do to support their local journalists, besides subscribing?
The biggest source of funding for public radio stations like ours is from our listeners. But, honestly, even just listening to our station on the radio, online, or on your phone helps us. Also, if you already know about the magic of public radio, tell a friend who hasn’t discovered it yet. And if you hear something you like, share it on social media. That’s a great way to get other people exposed to the independent, fact-based reporting that public radio is known for.

Who else is doing excellent coverage?
Locally, I’ve been really impressed by two newsletter-based outlets, Detour Detroit and Planet Detroit.

Laura Herberg is a community feature reporter and Weekend Edition Sunday host at WDET, Detroit’s NPR Station. She was named the Michigan Associated Press Best Reporter for Radio Broadcasting in 2017 and 2018. In her spare time, Herberg is also the creator of “Complete Me,” a podcast with only three episodes about how she has trouble completing tasks.