Letter to My Grandnephew 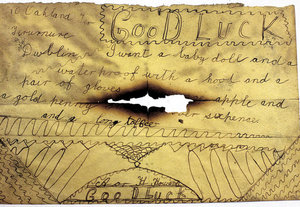 My spoon broke. My roommate moved out. The Olympics are starting. The dictator of North Korea got married. Albania has never won an Olympic medal. I have made a pair of plastic balls out of compressed plastic wrap. I only have three ballpoint pens left. I ate a big hot dog today with mustard and onions on it. (There was an extra bun and I ate it with just sauerkraut.) I don’t like the color blue. I wrote a poem about a little girl who drowned in a river. I like “The Rifleman.” There is a turkey sandwich in a paper sack at the foot of my bed. I just saw the flag of Bosnia and Herzegovina for the first time in my life. I have a little yellow plastic bead shaped like an elephant. It is standing on a small red, hexagonal box that sits on top of my TV set. The box is painted with glittery paint and has a picture of the Buddha on it. Inside the box is the 1,000th paper crane I folded wishing you would come visit me. My TV set has a 13” screen and a transparent case so you can see all the wires and components and electrical stuff inside. (It has a real cathode tube – I bet none of your TV sets do.) I would wear a kilt if I had one. I have an Arabic language CD but no CD player. When I was six years old I wore thick eyeglasses. I wish my sister Alyssa didn’t have cancer. Today when I was working on my math I had trouble holding my left hand steady. Last Monday I taught a yoga class. The paper I write letters to you on is 8” x 10.5”. I hate that. It’s supposed to be 8.5” x 11”. I’m writing a computer program to solve systems of non-linear equations. Since I don’t have a computer I’m writing it in my head. You are almost six-years-old. All the Czech Republic athletes are wearing blue boots. My brother Bob used to live in the Czech Republic. I get very nervous sometimes. I don’t believe that our eternal destiny is determined by what we do in this lifetime. The greatest clarinet player of all time was Henry Cuesta. I have written 721 pages of letters to you. It is possible to chew a piece of celery forever, because its cellulose does not break down. A British guy won the Tour de France this year. My beard is long and the hair on my head is thin. I look in the mirror more than I used to. My favorite TV show is “Cake Boss.” I own two rubber bands—no, wait, it’s three…I just remembered I have a rubber band around a bundle of 26 artificial-sweetener packets. I visited Idaho once and saw the state capital building. My watch battery went dead so now I sometimes carry a digital clock in my pocket. The Indians are in third place. I heard that lightning starts on the earth and strikes upward toward the sky. I like the trumpet solo in “Penny Lane.” Dogs are cool, I have decided. Unless my sister accidentally wrote the same name twice, I recently had two grandnephews born who are both named Carson. The world is astonishingly beautiful. Happiness is easy. I love you.