Julian Sanchez: On Fiction and Surveillance 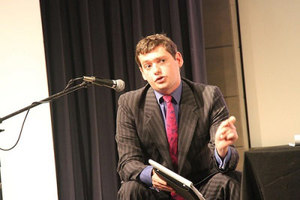 When we talk about surveillance and privacy—perhaps more than any other political question—we speak a language borrowed from fiction. When we’re worried about the civil liberties implications of the Patriot Act or wiretapping by the National Security Agency, we may say they are “Orwellian,” or raise the specter of “Big Brother” government. As we slip off our shoes, separate our mini-shampoo bottles, and raise our arms for the friendly agent of the Transportation Security Administration, the word “Kafkaesque” may leap to mind unbidden.

And then, of course, we have the Panopticon. In 1787, when the philosopher Jeremy Bentham first imagined a prison on the model of an “inspection house,” architected to enable total surveillance of its inmates (or patients, or students), he believed himself to be writing non-fiction—a proposal for a real structure. But the modern reader is far more likely to have encountered the Panopticon by way of Michel Foucault, whose seminal Discipline and Punish invoked it as a kind of fable or metaphor to illustrate the principle of control through observation. Though prisons on Bentham’s model were eventually constructed—long after his death—for us it is, above all, a useful fiction.

It is a fiction with increasing relevance, as technology tears down the walls of Bentham’s prison, and embeds panoptic architectures in the camera networks trained on our public streets, the computers in our homes, and the phones in our pockets. If we insist on giving it a physical address, the modern panopticon might be the massive data storage facility being constructed in Salt Lake City Utah by the National Security Agency, which will allow the complete storage of all Internet communications—or the facilities where Chinese censors aided by powerful algorithms strictly enforce the parameters of acceptable online discussion.

As the Slovenian philosopher Miran Bozovic has observed, the Panopticon is actually a fiction within a fiction: it is not the warden’s real monitoring that makes the Panopticon’s discipline effective, but the idea of the observer, hidden from view by the panoptic architecture, that forces the prisoners to always act as though they could be under surveillance. In the most efficient prison, the tower can be empty—the observer a complete fiction—so long as the inmates believe in his presence. If you want to deprive online dissidents of the advantages of Internet communications, the fiction of omniscience may be better than the real thing: the story, unlike the real policeman, can build its outpost in the citizen’s mind.

If the purpose is to gather intelligence rather than exert discipline, of course, the opposite fiction is needed—the fiction of privacy that induces the target to lower his guard and disclose his secrets. When the courts belatedly began to impose limits on the warrantless wiretapping program inaugurated by President Bush, administration officials loudly declared that the intelligence agencies had been struck blind, which we now know was almost certainly another fiction.

For both purposes—intelligence and deterrence—as far as the government is concerned, the less the public knows about the detailed structure and capabilities of the Panopticon, the better. This secrecy is the source of the familiar tension between the imperatives of intelligence and those of liberal democracy under accountable government. It may also be why we so often turn to fiction to understand surveillance—to shine a spotlight on the invisible observer, and hear the dissident voice that, in reality, falls silent under the panoptic gaze.

Our ability to understand the realities and dangers of surveillance, then, depends crucially on the stories we tell. The dystopia of Nineteen-Eighty Four is not that of Brave New World—even if our reality contains the seeds of both. The legal scholar Daniel Solove, in his important book The Digital Person, argues that modern threats to privacy are better understood through the lens of Kafka than Orwell—and that by relying too heavily on Big Brother metaphors, we misunderstand where the most pressing threats lie. If the Panopticon is made of stories, so is the gate that might lead us out of it.