Joint Statement: Concern about the Disappearance of 5 Hong Kong Booksellers 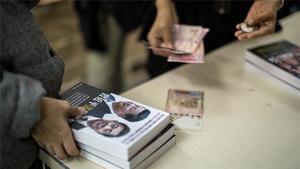 The American Booksellers Association (ABA), the Association of American Publishers (AAP), the Authors Guild (AG), the European and International Booksellers Federation (EIBF), and PEN American Center (PEN) wish to express their extreme concern over news reports about the disappearance of five employees of a Hong Kong publishing company, Mighty Current, and its bookstore, the Causeway Bay Bookstore.  According to these reports, four of the employees disappeared in October, including the bookstore manager.  A fifth employee, Lee Bo, was reported missing last week.  Mighty Current is well-known for publishing books critical of the Chinese leadership.  Mighty Current books are sold by the thousands at the Hong Kong airport and other locations, including the company bookstore in Hong Kong’s Causeway Bay neighborhood.  They are particularly popular with tourists from mainland China, where the books are banned.

It is widely believed in Hong Kong and abroad that the missing booksellers have been taken into custody by Chinese authorities.  Mr. Lee and several of the other missing men have called their families from China.  Mr. Lee told his wife he is assisting the authorities with an investigation.  The Chinese government has neither confirmed nor denied that the men are in China.  However, Global Times, a Communist Party publication in China, recently published an editorial accusing Mighty Current of “stirring up troubles on the mainland.”

ABA, AAP, AG, EIBF and PEN urge the Chinese government to explain the disappearance of the Hong Kong booksellers.  If they are in custody, we call for their immediate release.  When Great Britain relinquished control of Hong Kong in 1997, China promised to protect freedom of press there for 50 years.  The summary abduction of men who are engaged in the publication and sale of books would be a very serious violation of press freedom and would have a profoundly chilling effect on free speech in Hong Kong.

We also urge the United States government to investigate the circumstances of these disappearances and to assist in the release of the men.