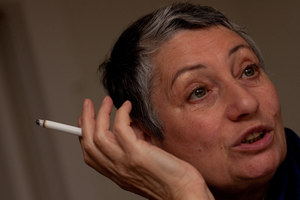 PEN: Several of the questions raised in Daniel Stein, Interpreter touch upon very sensitive issues, not just in Russia but globally. However, tolerance—ethnic, religious—seems to be a particular pressure point in today’s Russia (especially if you follow the stories in the U.S. media). Do you see this as an alarming problem or is the matter exaggerated?

Ludmila Ulitskaya: I would say that xenophobia is at the root of all problems. People dislike outsiders, are wary of them, sometimes hate them, and all these negative emotions are based on a lack of understanding. Xenophobia is very pervasive in Russia. Occasionally, its target changes: in the years following World War II, American imperialism was declared enemy number one, then Jews. Years later, natives of the Caucasus region became the main enemy. The government often uses existing xenophobic attitudes for its own gain, directing them to its advantage by offering a political justification. The U.S. also has its share of problems in the spheres of race relations and international relations, but one has the impression that the U.S. government, unlike Russia’s, is never an instigator in these matters.

PEN: Were there any surprises in the way the novel was received in Russia? In other countries?

Ulitskaya: Yes, the staggering success of the book. I was convinced that I was writing a book that would only appeal to a narrow circle of highly cultured, broad-minded people. But as it turned out, the book also attracted a much broader readership and audiences that I wasn’t counting on at all.

In addition to dealing with questions of time and fate, as any novel should, the book contains another idea that is very important to me personally: that a person becomes free as they rid themselves of the dogmas and clichés they have adopted and internalized over the course of their life.

After giving it much thought, I ascribe the success of the book to the fact that it contains the answer to a question society has been struggling with but hasn’t quite formulated yet. Namely, where is the line between institutionalized faith and righteousness, goodness? Are the divisions between various religious confessions really substantial? One of the ideas put forth by St. Augustine—that the divisions between denominations created by people on earth do not extend as far as the heavens—needs to be revisited in our modern times.

PEN: You were named Laureate of the Simone de Beauvoir Prize, the international human rights prize for women’s freedom. What spurred you to write about women’s issues?

Ulitskaya: I never wrote specifically about women’s issues, but it seems that is the summary conclusion which the jury came to. For the sake of consistency, I have to say that women’s rights in Russia are no more infringed upon than the rights of children, the elderly, the handicapped, the incarcerated and other minorities. If there is anything that places me squarely within the Russian literary tradition, it is my sincere interest in the fates of those who exist on the fringes of society. There, among the “little people,” both men and women, is where I always find my protagonist. And it’s more often a woman rather than a man.

PEN: What is the situation like for women’s freedom today in Russia?

I’ve never done any specific research on the subject, I am not a feminist. The situation with all kinds of freedoms is far from ideal. But I’ve chosen a way to address this through my work. For several years now I’ve been directing a book series for teenagers titled The Other, Others, About Others. Fourteen books have already come out. They are dedicated to various topics in cultural anthropology and ethnography. I believe that sharing information about representatives of other cultures, other traditions and ways of life goes a long way towards cultivating mutual understanding among people. There is no such thing as women’s freedom detached from the overall context. It is the context that I am trying to change.

PEN: What is your take on what is happening to women’s roles in countries that have recently experienced uprisings and political protest? Is Russia’s situation is related or a reaction to all this?

Ulitskaya: I feel great compassion towards women who were born into misogynistic cultures.

As for the situation of women in Russia, there are more and more women being drawn into terrorist organizations, more and more women among suicide bombers. The fates of these women are terrible—they have been forced into committing a terrible crime through pressure from their husbands, relatives, leaders. Often they are victims of blackmail.

PEN: How did you get teamed up with PEN Literature in Translation Award-winning translator, Arch Tait? How closely did you work together on the translation process?

Ulitskaya: About 10 years ago, I first had one of my books published in English, and the translation (carried out by a different translator) failed entirely. The publisher gave it to Arch Tait to save it, and that’s when we met. Ever since then he has been my only English translator. I feel very lucky to have found someone who is highly educated, intelligent, open, and able to relate to the hardships of people he has never met.

We authors are extremely dependent on our translators. I am always prepared to put in as much time and effort as it takes to work with a translator. And as a result, I have great relationships with my translators. Last year in Moscow, a big meeting of all my translators was organized as part of a very large literary event. Unfortunately, Arch Tait couldn’t be there. But there were about 20 translators from many different countries, who all shared one theme and one language—Russian. Believe me, it was a wonderful meeting.

I hope to see Arch Tait in London next week at the London book fair. He promised to come down from Cambridge, and I look forward to a nice literary get-together with him.

PEN: The mix of narrative and “documents” in the book must have posed a unique challenge for both author and translator; can you speak to your decision to write the book in such an unconventional format?

Ulitskaya: I think the most accurate answer I can give is that the book itself decided to be like that. I had trouble writing it for many years precisely because I couldn’t find the right format for such a difficult conversation. There’s an expression in Russian, “It’s the retinue that makes the king.” Well, I needed to create the right retinue of characters to cast light on my Daniel, my dear and beloved protagonist, whose appearance and entire demeanor were otherwise quite ordinary. But the people who surround him aren’t just extras in the book. Some are real, some are fictional, but all were given their own independent part to play. That was the logic governing Daniel’s life: for him, there were no insignificant people. Everyone he encountered felt unique in his presence.

PEN: You once said that life, to you, is more important than writing. What is your life now? What are the things in life that are important to you? Has it changed with the changes that have been taking place in Russian, in the world?

Ulitskaya: I am an observer by nature. And life offers me such delightful images and scenes, such wonderful, big-hearted and dear people, that I am quite content. It feels awkward to say “happy …” Changes are interesting as well. Even the ones that are not to my liking.