In Malaysia, It Is Still Illegal to Disagree 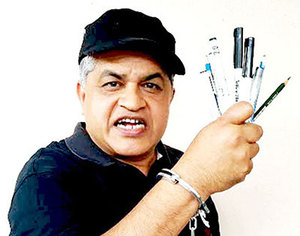 Little has changed about the dismal state of free expression in Malaysia since February when PEN last reported on the government’s widening use of the 1948 Sedition Act to suppress and silence its critics. The Federal Court has struck down a constitutional challenge to the colonial-era law, reinforcing the government’s right to arbitrarily harass and arrest Malaysian citizens for online posts and political cartoons.

At least six individuals have been charged under the Sedition Act since the October ruling. The most recent include activist Lawrence Jeyaraj and leader of the socialist party S. Arutchelvan, whose censure of opposition leader Anwar Ibrahim’s sodomy verdict on Facebook could land them a three-year jail sentence. Back in April, well-known cartoonist Zunar, who was among the recipients of The Committee to Protect Journalists’ 2015 International Press Freedom Awards on Tuesday, was slapped with nine counts of sedition for voicing the same criticisms on Twitter and could be sentenced to 43 years in prison.

The Najib Administration has made aggressive moves to criminalize ideas and views that fall outside the narrow parameters of accepted political speech. Added to the growing list of politically taboo subjects in Malaysia is the charge of corruption against Prime Minister Najib Razak, who has already suspended two local publications for exposing his misconduct involving a government investment fund. Earlier this month, officials made repeated visits to Malaysiakini’s office following the independent newspaper’s reports on the unfolding scandal.

In this climate of fear and intimidation, many say they feel the pressure to self-censor. Human rights groups in the country are concerned that these tactics are aimed at preventing opponents from running in regional and federal elections. As the crackdown on free expression in Malaysia intensifies, so have the calls on authorities to drop all politically motivated charges and to repeal the Sedition Act altogether.