from Kissing the Sword 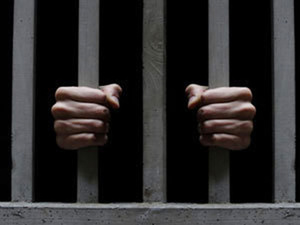 One day in the communal cellblock at Ghezel-Hessar Prison, at the time of evening prayers which coincided with the news hour on television, we learned that an American space shuttle with seven crewmembers on board had exploded. They showed footage of the explosion. As always, when important news was being broadcast, there was a great commotion. The prisoners all ran toward the television we were allowed to have in the unit and ninety percent of the news was lost in the noise. This always upset me. Television was our only window to the world, and even I who didn’t have a natural affinity for it had come to depend on it. On another occasion, in Disciplinary Unit 8, news was being broadcast about Massoud Rajavi, a leader of the leftist group the People’s Mujahedin of Iran, who were being persecuted by the fundamentalist government. Obviously, the Mujahedin prisoners were quite interested, but again, much of the news was lost in the clamor of people jostling for a place in front of the television. That time, I suddenly screamed, “Shut up!” A strange silence fell across the unit and we managed to hear the tail end of the news. People who know the etiquette of dancing always know when to be still, when to move, and when to be silent. But unfortunately, dancing is deemed shameful in present-day Iran.

When the American space shuttle exploded, the prisoners all looked upset. I was puzzled. Since the start of the Islamic Revolution in Iran, “Death to America” had been the constant slogan of the Islamic Republic and at Friday prayers the crowd would start by chanting “Death to America, death to Israel.” It always surprised me that at least in the early days, they didn’t chant “Death to the Soviet Union.” The Soviet Union had a communist government and its meddling in Iran was obvious. I concluded that being in close proximity to this giant was reason enough not to shout such slogans. The fear and respect of the neighbor to the north did not seem to extend to the prison officials. They had ordered the Soviet and American flags to be painted on the ground outside the unit’s entrance so that prisoners would have to walk over them to enter the compound. It was in this atmosphere that the prisoners were expressing their sorrow over the shuttle’s explosion.

It had gotten dark outside and they had closed the doors to the courtyard. As I stood by the door, wishing I was in the fresh air, a young girl of perhaps seventeen walked up to me and in a somber tone asked if I had heard the news. I nodded and said, “Don’t you all constantly claim that you’re opposed to America? Then why has news of the shuttle exploding upset you so much?” She looked at me wide-eyed and said, “But this is science. It is humankind’s knowledge. It belongs to everyone.”

So there was America, which we identified with the slogan “Death to …” and alongside it there was science that belonged to all mankind and united all societies throughout the ages. I spent the entire next day thinking about this. I thought about Christianity, which took root in Palestine, and was taken to America by European immigrants. Religion is universal in nature, and science had proven to be the same.

I thought about the moment of my arrest and all that had happened since. I thought that after my release from prison I would write my memoir of the prison years. For various reasons it was delayed and eventually it became more or less a dead issue. Now, in Los Angeles, in Beverly Hills, in a completely American environment, I have taken up my pen and I am searching for a beginning. Finding that starting moment is difficult.

I have been to prison four times. I have never been accused of any crime, except for the third time and that was based on falsified evidence, as the court later agreed. During my years in prison, I never took notes. In general, throughout my life, I have never jotted down notes. Therefore, I may make mistakes in providing specific dates. I have also forgotten the names of many of the prisoners. But, to the extent that memory serves, I promise to be just and accurate in recreating events.