Words and War: Ukrainian Writers Reflect on a Moment of Crisis 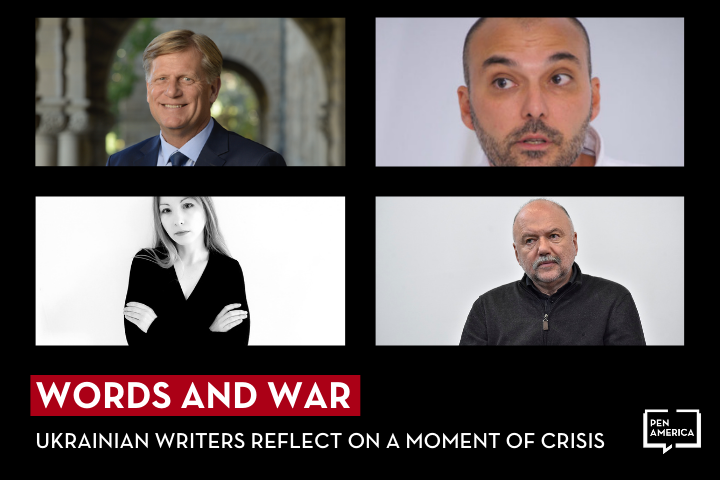 In 2014, Russia illegally annexed Crimea and provided military support to the separatist forces in the eastern region of Donbas. Fears of a renewed Russian military aggression against Ukraine have been realized. Russian military incursions via land, sea, and air are creating lasting damage and terrorizing innocent Ukrainians, in a direct affront to their country’s sovereignty and the basic tenets of international law and human rights.

In the face of increasing peril, Ukrainian writers remain resolute, devoted to their homeland.

Andriy Kurkov, a Ukrainian writer, journalist, and screenwriter, has been the President of PEN Ukraine since 2018. He is an author of 19 novels, 9 books for children, and more than 20 movie scripts translated into 37 languages and published in 65 countries. In 2014, Kurkov was awarded the National Order of the Legion of Honour (France). His most recent work has been centered around Ukrainian struggle for freedom and independence, documenting key moments of Ukrainian Revolution of Dignity (Ukraine Diaries: Dispatches from Kyiv) and telling the story of the day-to-day life of people who found themselves living in the ‘grey zone’ in Eastern Ukraine (Grey Bees). Kurkov often contributes to a variety of media around the world, commenting on the political situation in Ukraine and the fate of its political prisoners captured by Russia.

Victoria Amelina is a Ukrainian novelist, essayist and activist. She was born in 1986 in the city of Lviv, Ukraine, and has lived in Canada and the US. Victoria Amelina is a winner of the Joseph Conrad literature prize 2021 and finalist of European Union Prize for Literature 2019. She is a founder of the New York Literary Festival that takes place in a small town called New York near the frontline in the war-torn east of Ukraine. Before becoming a writer, Victoria Amelina worked in high tech as an engineering manager; she holds an MS degree in Computer Science. In 2014 she became a laureate of the Ukrainian National Literary Award Koronatsiya Slova, and released her debut novel. Victoria Amelina’s works are translated into several languages, including English, Polish, Checz and Dutch. She is most known for her two novels, ‘Fall Syndrome, or Homo Compatiens’ and ‘Dom’s Dream Kingdom’.

Michael McFaul is the Ken Olivier and Angela Nomellini Professor of International Studies in Political Science, Director and Senior Fellow at the Freeman Spogli Institute for International Studies, and the Peter and Helen Bing Senior Fellow at the Hoover Institution, all at Stanford University. He was also the Distinguished Mingde Faculty Fellow at the Stanford Center at Peking University from June to August of 2015. He joined the Stanford faculty in 1995. He is also an analyst for NBC News and a contributing columnist to The Washington Post. McFaul served for five years in the Obama administration, first as Special Assistant to the President and Senior Director for Russian and Eurasian Affairs at the National Security Council at the White House (2009-2012), and then as U.S. Ambassador to the Russian Federation (2012-2014). He has authored several books, most recently the New York Times bestseller, “From Cold War to Hot Peace: An American Ambassador in Putin’s Russia.”

Vakhtang Kebuladze is a philosopher, writer and translator. He is a Professor at the Department of Theoretical and Practical Philosophy at Kyiv Taras Shevchenko National University. In 2016, he won the Yuri Shevelov prize for Ukrainian essay writers. He is the author of three books: Destiny’s Charms (2016), Phenomenology of Experience (2012), and Phenomenology: A Manual (2005). He has co-authored many other works,including Do You Want to Talk about This? New Psychological Culture in Post-Soviet Belarus and Ukraine (2014). He has also translated several German philosophical texts – including Nietzsche’s ‘Morning Dew: Thoughts about Moral Preconceptions’ – into Ukrainian.