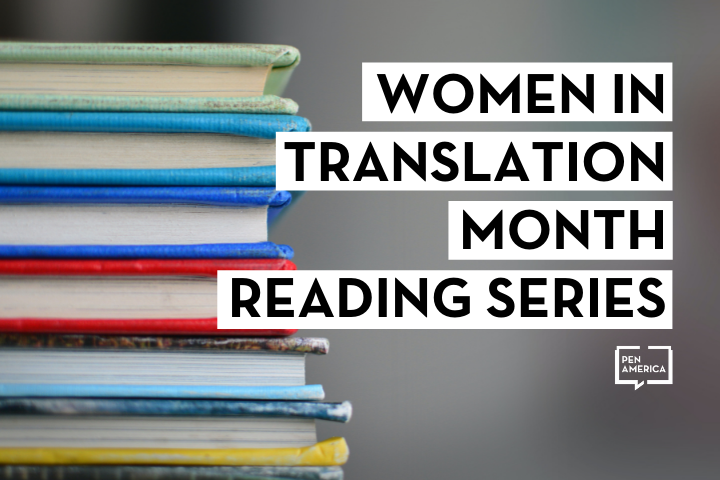 August is here, and it’s time to celebrate Women in Translation (#WiT) Month again! This reading series was initiated by blogger Meytal Radzinski in 2014 to raise awareness of translated literature by women, queer, and nonbinary authors, and promote gender and cultural diversity in literary publishing. This year, our virtual reading series will gather voices from across time zones for an international celebration!

Organized under the support of the PEN America Translation Committee, these events will bring together a total of 15 translators, joined by their authors, working in 12 languages from across the world, including Cameroon French, Canadian French, Chinese, Czech, German, Hebrew, Japanese, Korean, Portuguese, Russian, Spanish, and Swedish. The reading will be followed by a brief Q&A discussion, time-permitting. We hope you’ll join us for these one-of-a-kind bilingual readings!

The Women in Translation Reading Series will take place on Zoom on three consecutive Thursdays in August: August 12, August 19, and August 26 at 2pm ET. The conversations will be moderated by Piotr Florczyk, Jenna Tang, and Nancy Naomi Carlson.

Piotr Florczyk has published 10 volumes of Polish poetry translations, including Julian Kornhauser’s I’m Half of Your Heart: Selected Poems and Anna Świrszczyńska’s Building the Barricade, which won the 2017 Found in Translation Award and the 2017 Harold Morton Landon Translation Award.

Jenna Tang is a New York-based selected translator for the 2021 ALTA Emerging Translator Mentorship Program. She translates from Chinese and Spanish. Her translations are published in Latin American Literature Today, the Asian American Writers’ Workshop, and elsewhere. Her interviews can be found in World Literature Today and Words Without Borders.

Join us as we present Maggie Nelson in conversation with @cathyparkhong to discuss Nelson’s new book ON FREEDOM for the @BKBF on 9/29! https://bit.ly/3l5PYNy

Join @WorkerWriters for a free Coronavirus Haiku reading and conversation on Thursday 9/30 to hear from writers and their life as “frontline workers” during the Covid 19 crisis and their engagement with the Worker Writers School. Register here: https://bit.ly/3Cy3gZY.