See pictures from the event here » 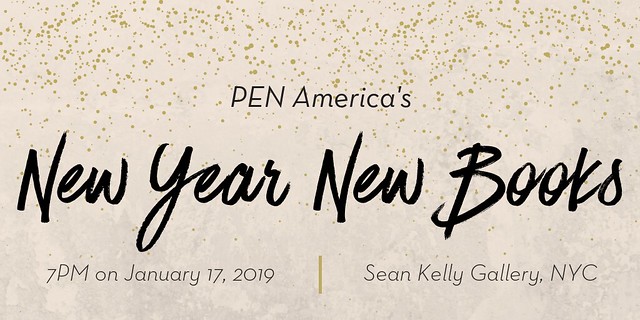 Highlights from the photobooth! 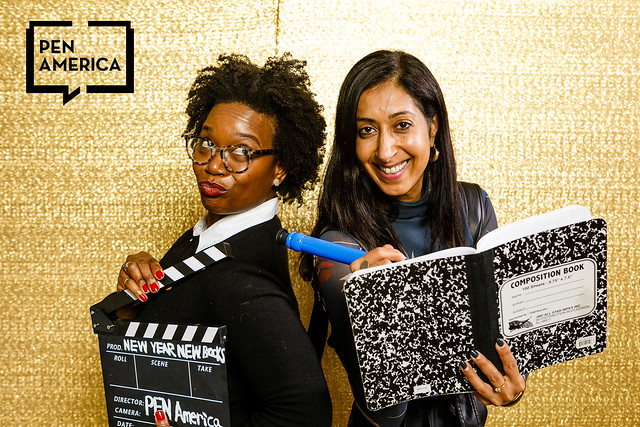 PEN America Members and supporters celebrated the New Year at the annual New Year New Books party in New York City! Hosts Darnell Moore, Glory Edim, Hannah Lillith Assadi, Hanya Yanagihara, Jennifer Egan, Masha Gessen, and Ron Chernow joined us in raising a glass to your favorite books of 2018. Amidst acclaimed writers, journalists, editors, agents, translators, and publishers, attendees smiled for the camera at the photobooth and received personalized poems from The Haiku Guys + Gals. Thanks to all who joined us for this lively celebration of literary community!

Darnell L. Moore is Editor-at-Large at CASSIUS (an iOne digital platform) and formerly a senior editor and correspondent at Mic. He is co-managing editor at The Feminist Wire and an editor of The Feminist Wire Books (a series of University of Arizona Press). He is also a writer-in-residence at the Center on African American Religion, Sexual Politics and Social Justice at Columbia University. Along with NFL player Wade Davis II, he cofounded YOU Belong, a social good company focused on the development of diversity initiatives.

Glory Edim is the founder of Well-Read Black Girl, a Brooklyn-based book club and online community that celebrates the uniqueness of Black literature and sisterhood. In fall 2017, she organized the first-ever Well-Read Black Girl Literary Festival. She has worked as a creative strategist for over ten years at startups and cultural institutions, including Kickstarter, The Webby Awards and the New York Foundation for the Arts. She received the 2017 Innovator’s Award from the Los Angeles Times Book Prizes for her work as a literary advocate. She serves on the board of New York City’s Housing Works Bookstore and lives in Brooklyn, New York.

Hannah Lillith Assadi was raised in Arizona and lives in Brooklyn. She received her MFA in fiction from the Columbia University School of the Arts. Her first novel Sonora (Soho, 2017) received the Rosenthal Family Foundation Award in Literature from the American Academy of Arts and Letters and was a finalist for the PEN/Robert W. Bingham Prize for Debut Fiction. In 2018, she was named a National Book Foundation 5 under 35 honoree. Her second novel The Stars Are Not Yet Bells is forthcoming from Riverhead.

Hanya Yanagihara is a prize-winning author and the Editor-in-Chief of T: The New York Times Style Magazine. Her novel A Little Life, won the 2015 Kirkus Prize, was a finalist for the National Book Award and the 2016 Baileys Women’s Prize for Fiction, and was shortlisted for the Man Booker Prize. The People in the Trees was shortlisted for the PEN/Robert W. Bingham Prize in 2014. She joined the PEN America Board in 2016.

Jennifer Egan is a Pulitzer-Prize winning writer and the president of PEN America. Her most recent work, Manhattan Beach, won the 2018 Carnegie Medal for literary excellence and was recently selected as the One Book, One New York City-wide read. Her short stories have appeared in The New Yorker, Harper’s, Granta, McSweeney’s, The Best American Short Stories, and other magazines and collections. Her nonfiction articles appear frequently in The New York Times Magazine, and her 2002 cover story on homeless children received the Carroll Kowal Journalism Award. Her article “The Bipolar Kid” received a 2009 NAMI Outstanding Media Award for Science and Health Reporting from the National Alliance on Mental Illness.

is a journalist and the author of 10 books of nonfiction, most recently The Future Is History: How Totalitarianism Reclaimed Russia, which won the 2017 National Book Award for Nonfiction. Gessen is also the author of the national best-seller The Man Without a Face: The Unlikely Rise of Vladimir Putin (2012). Gessen is a staff writer at The New Yorker and a national fellow with New America Foundation. Gessen serves as vice president of PEN America.

Ron Chernow’s best-selling books include The House of Morgan, winner of the National Book Award; The Warburgs, which won the George S. Eccles Prize; The Death of the Banker; Titan: The Life of John D. Rockefeller, nominated for the National Book Critics Circle Award; Washington: A Life, which received the Pulitzer Prize for Biography; and Alexander Hamilton, nominated for the National Book Critics Circle Award and adapted into the award-winning Broadway musical Hamilton. Chernow has served as president of PEN America, has received eight honorary doctoral degrees, and was awarded the 2015 National Humanities Medal. He lives in Brooklyn, New York.