The PEN Ten with Khadijah Queen 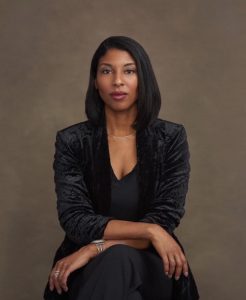 The PEN Ten is PEN America’s weekly interview series. This week, Guest Editor Kyla Marshell interviews Khadijah Queen, author of I’m So Fine: A List of Famous Men & What I Had On​ (YesYes Books).

Marshell writes: Sly, sharp, witty, wry: that’s how I think of Khadijah Queen’s work. It’s not just the tongue-in-cheek (literally, the suggestion of something you can’t see) quality I love, but the unmistakable presence of side-eye, the smirking knowledge she parses out to her readers, bit by bit. Who else could write a book with the title I’m So Fine: A List of Famous Men & What I Had On—both meaning it and not, both showing and hiding her face on its cover—and talk about Prince and Dave Chappelle and being in music videos and rape culture in one long breath? Smirk: No one else.

I wanted to say, at first, that my identity as a single mother, a Black woman, a disabled veteran, a teacher, and an artist shape my life, my outlook, and thus, by extension, my writing. I wanted to say that my identity determines my opportunities to make a living, to a great extent; how much or little time I get to spend writing; and what I write about. But, I also want to say that’s all rubbish. I want to say that my writing determines my identity as a writer. This question feels super convoluted, so I don’t have a real answer. I want to say that I think writers would do better focusing on doing the work rather than worrying about what “the writer’s identity” is. That feels like a privilege, and one I’m not always able to access myself in practice, since I exist in a body that is constantly identified and misidentified and imposed upon by outside assumptions. Perhaps “the writer’s identity” only exists in theory, and I am a bigger fan of practice. I would love to say that having an identity as a writer means doing the work of writing, versus talking about it.

2. In an era of “alternative facts” and “fake news”, how does your writing navigate truth? And what is the relationship between truth and fiction?

I think the difference between true facts and “fake news” resides in intention. We know from both truth and fiction that the smokescreen created by Orwellian language attempts to deflect attention from evil actions and works to disguise ill intent. As far as the relationship between truth and fiction, the truth of fiction is what we connect to, as readers, on a heart level. Fiction helps us access the truth via feeling—or, perhaps more accurately, a felt knowing—rather than bare facts. That kind of deep understanding is only made deeper when we know any accompanying facts. Our intuition is powerful. The truth in fiction taps into that intuition, and helps us to further trust it, which makes for a more complete knowing.

Other writers inspire us all, or we probably wouldn’t be writing. But overt lifting of someone else’s style or lines or ideas without attribution falls under appropriation. That has happened to me more than once, and it feels very much like a violation. If you are inspired by another writer and don’t transform what you’ve absorbed in a material way, cite that writer. It ain’t that hard.

4. “Resistance” is a long-employed term that has come to mean anything from resisting tyranny, to resisting societal norms, to resisting negative urges and bad habits, and so much more. Is there anything you are resisting right now? Is your writing involved in that act of resistance?

I am actively resisting gendered expectations, harassment, and violence in my life and in my work. On a lighter note, I am also resisting the urge to watch Black Panther every day. I’ve seen it four times already. My unrevised writing is like, “We do not live in Wakanda; get back to work!”

Using power and authority to shame or bully people into silence. Yes, there have been many times. During those times, I waited until I was ready—strong enough and supported enough and bold enough to express what I had to say anyway, on my own terms.

Probably my comments about sexual harassment and violence in the literary world.

7. Have you ever written something you wish you could take back?

I rotate, though I’d say lurk over stalk. I’ve had multiple actual stalkers, so I don’t take that word lightly. I try to participate when I have something to say, and I read a lot of what my peers share. I think social media is a fantastic resource, and a wonderful way to connect. When it feels like too much, I just take a break.

9. What’s an influence of yours that might surprise your readers?

Alexander Pope. I reread The Rape of the Lock when I was writing I’m So Fine because in my undergraduate English classes I remembered writing about how fantastically he handled satire and humor, and I also wanted a reminder about historical literary approaches to Western class perceptions and gendered social machinations.

10. If you could choose just one person to read your work, who would it be, and why?

Okay, this is highly improbable, but I’ma just say it. Toni Morrison, because if I could make her laugh out loud, or make the noise Black women make when we read something that rings deeply true, it would mean I have done my job in this life.

Kyla Marshell’s work has appeared in Blackbird; Calyx; ESPN; Gawker; The Guardian; O, the Oprah Magazine; and SPOOK. Her work has earned her Cave Canem and Jacob K. Javits fellowships, two residencies to the Vermont Studio Center, and an MFA in Creative Writing from Sarah Lawrence College. In 2013, Ebony.com named her one of  “7 Young Black Writers You Should Know.” A Spelman College graduate originally from Boston, she grew up in Silver Spring, MD; Morehead, KY; and Portland, ME, and now lives in New York.

The PEN Ten with Marcus Wicker