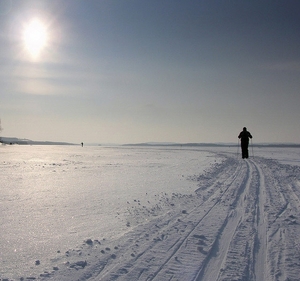 Before I’d ever seen a cross- country ski I used to have a recurring dream. I was on some other planet. I slipped out of a dark city, through a gap in the force field, and into a meadow. My body was changing mysteriously. It was dawn. The sky was apple- green; the air felt like a silk shirt. I had to go somewhere far away. My body was changing so that I would be able to. It grew longer and lighter. I began to run, easily but with an astonishingly powerful spring. Air came into my lungs not only through my mouth but directly through the skin of my chest. It was like slaking a deep thirst. I came to a hill. I feared that would be the end of the magic, but the new power just coiled up tighter. It made me laugh. I breasted the hill and kept on, absorbing the silver air and discharging energy downward through my calves and forward from my brow and eyes. I was acutely conscious of the trees and rocks and the air and light, and how my motion was in rhythm with them. The purpose of the journey and what lay beyond the next hill changed from dream to dream, but the original sense of my body in motion was constant and recurring.

When I finally learned how to cross- country ski, I realized these dreams had been a foretaste of sensations obtainable here and now. It wasn’t like that at first, of course, nor is it like that every day now. But every so often I’m shot through with everything the dream foretold.

If you’ve ever had an affection for a canoe or a slender rowboat, taken pleasure in the elegance of the lines, the neat slice of the bow, the clean tuck of the stern, and felt a seed of superstition that a boat like that is sensate and likes moving through the water, then you may find a particular joy in cross-country skiing: once you begin to get the motion right, the kicking and gliding and riding the driving ski with your body weight floating over it, you may find that you have swallowed your boat whole, that you are your boat moving across a lake of still air and snow. But even the first awkward runs can have grace. The first cross-country skis I got were sturdy wide clodhoppers, not the fragile and elegant ones I have now. I was living in Iowa, where there are still strips of virgin forest by rivers and among the few hard-to-till hills and gullies. I used to bundle up and shuffle along through an oak forest, innocent of technique and wax but happy to wander alone, puffing up clouds in the motionless subzero air. The third time I went out in this forest there was a foot of snow and more falling. I jogged and poled my way along an old logging road. I reached the top of a rise and started sliding down the other side, making no more noise than a sailboat slipping through flat water.

A red fox, beautifully furred, was sitting on a stump beside the road. His tail was wrapped around his hip and across his forepaws. I could see the particular hairs of his coat. He looked at me curiously as I drifted toward him. He wasn’t alarmed, I think because I wasn’t making any of the moves I should have been to be advancing on him. I slid closer, and he hopped down like a cat from a sofa. About ten yards in front of me. He loped down the road— fairly casually, considering he sank in the snow up to his shoulders at each bound. I tagged along, sliding downhill after him. After a hundred yards the fox glanced around. He looked concerned that I was still with him. He upped the pace. I poled a bit and scrunched down. He glanced around again, more puzzled than alarmed. He stepped to the side of the road and let me pass by. Our eyes met. The fox pricked his ears, but there was no noise. I ghosted on down the rest of the hill, my head turned back to watch him. He came into the middle of the road and watched me, his head cocked to one side.

Skin divers tell me that they are objects of curiosity to the fish down in that silent world.

There are still patches of dream landscape to glide into quietly: a coral reef, woods muffled in a foot of snow and more falling.

The next winter we were in Rhode Island in the cold stone cottage near Matunuck on the edge of a six- or seven-square-mile wedge of eerie second-growth woods (pine and rhododendron gone wild). The interior of the woods was dotted with glacial ponds and a few empty summerhouses. The only resemblance to Iowa was the snow, but that was wetter and coarser. But once I discovered klister waxes I was released into another winter solitude, richer for a forgotten graveyard and dilapidated stone sheep pens inaccessible to summer people because of the brambles and bull briar now snowed over. In November, before the snow, I’d got lost in these woods and spent part of a chilly night curled up in wet leaves. After it snowed, however, I could go anywhere and be able to get home by following my tracks. I used to glide by the graveyard at dusk, the light more of a glow rising from the snow than falling from the sky. An owl sometimes followed me, winging from tree to tree, hoping to catch whatever rodent life I might scare up from underneath the snow. Once a partridge burst out of a drift at my feet, leaving a vapor trail of snow crystals hanging in front of me.

After a cold spell I was able to ski on Potter Pond, one of a series of salt ponds along the South County coast. The ice, covered with snow, was solid right up to where a narrow gut let the tide in crossways near the southern end. There the ice was suddenly cut off in a mile- long stroke as though by one slice of a knife. Going out at dusk again, I could glide right to the edge of the ice and stand quietly within twenty yards of Canada geese and black ducks paddling around in the dark seawater.

On Potter Pond part of the spell was skiing past the ghost of summer—boathouses, beached boats, and sections of dock. The neat gray- and- maroon or yellow- and- blue paint jobs, splotched with ice and blown snow, were all a shade more somber in the hard winter light. On windy days I could take off my life jacket, hoist my parka on my ski poles, and sail downwind across the pond.

But to do it up right, you really have to go north. I began to intrude on friends in Amherst, Massachusetts, and Putney, Vermont. It was on one of these trips that I finally saw what real cross-country skiing is. Putney was a nest of good cross-country skiers, a number of them on the U.S. team. The Putney School kids were good too, since John Caldwell was the school coach as well as the Olympic coach at that time. There are miles and miles of trails laid out for training cross- country skiers— through birchwoods and pinewoods, hayfields, and apple orchards. It was in an apple orchard that I saw a skier skimming along, each stride extending his body easily and fluidly so that for a split second at the end of each kick his upper body seemed to be flying over his forward knee. This form of skiing is more graceful than skating (which it distantly resembles), because the motions are larger and are concentrated in straight lines. I wanted that motion; I could tell that it would feel good—even better than running or skating or rowing or swimming.

Unfortunately, the winter in Rhode Island turned to rain. I tried dreaming about how to do it right (which is how I learned to downhill- ski as a kid and, later, how to shoot pheasant. I’d try for a while, then watch it done right, then hook the two together in a dream lesson).

Having had an instructive dream or two, reread John Caldwell’s The New Cross- Country Ski Book, and jogged a bit, I entered the George Washington’s Birthday Race, a southern Vermont event. Eighteen kilometers (about eleven and a half miles) from Westminster West to Putney. A crowd of four hundred or so. One hundred seeded skiers (U.S. cross- country and biathlon team members as well as college racers) lined up ahead of the mob for the mass start. At the gun the crowd yelled a collective Comanche whoop and sprinted forward. Like the subway at rush hour but with everyone swinging ski poles. We swept up a hill, down again, funneled across a footbridge, and then up again. And up. I fell in behind a fellow who was striding along with style. Tried to catch his rhythm. By now the crowd was strung out in double file up and around the shoulder of a hill. It looked like a procession of medieval flagellants.

On and on. I saw, or rather dimly perceived through a pulsating pinkish haze, a sign beside the trail. The sign said “Kilometer 1.” I heard a far- off train whistle that turned out to be coming from my throat. But then, mysteriously, at kilometer four, it cleared up. I was skiing better than I ever had. There was a wide channel from my throat to the bottom of my lungs. The air tasted like sweet cold springwater. The birch trees were white again, the sky blue.

After the race (about an hour and a half for me) I stood for a while, bubbling with deep well- being. I felt like a potbelly stove— I was throwing off a shimmer of heat a foot in every direction. I skied back to the house where I was staying, two or three miles through the woods, still glowing with blood heat and drinking in gallons of air laced with pine trees and imminent snow.