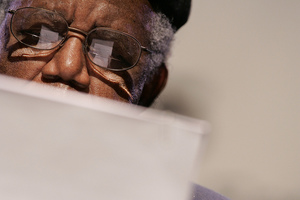 Reprinted with permission from PEN International and Tade Ipadeola.

World literature acknowledges an immortal in the transition of Chinua Achebe whose quiet dignity brought unprecedented attention to African literature written in English, translated into more modern world languages than any other African writer before him and studied in every notable institution of learning around the world. As Aretino said upon the death of Michelangelo, the world has many kings but only one Michelangelo. I acknowledge that the world has many potentates but only one Achebe. He was the tree that made a forest, the one voice that travelled beyond the seven seas.

Chinua Achebe lived as the poet Robert Browning before him prescribed: he kept one end, writing, in view—and made everything else serve that end. Adversity and prosperity, war and peace, love and indifference all were transformed by that alchemist we knew as Chinua Achebe into a different substance universally recognised, and acclaimed, as literature. The total effect of that way of living cannot be calculated in simple terms. Achebe compelled attention, commanded respect. One did not have to agree with him but one had to listen to him. Few writers ever achieve that degree of relevance in their lifetimes. Achebe set out in the morning of his life to be the writer with whom you had to engage. Book after pertinent book, this wordsmith stunned the literary world with his writings. No one gave him any quarters, he had to fight for every inch of glorious ground.

Many people know Things Fall Apart. Not as many know of Arrow of God or A Man of the People. These were his finest works of fiction, creations over which he laboured when he was young, when the sap flowed strong in the trunk of what became his magnificent Iroko tree. He wrote for children too. He wrote essays and even attempted poetry. He wrote short stories and only last year published his memoir, There Was a Country.

It wasn’t possible to be indifferent to Achebe. You loved him or hated him. Sometimes you did both at the same time. He wrote so beautifully, so efficiently that his medium was as much a means of spreading his message. He wrote as he spoke, in a spare, stern way. He was, nevertheless, intricate in his creations. His writings, examined, consisted of a balance that was not always apparent. If we borrowed from one of his own favourite images, his work was lattice-work. Achebe was no mean craftsman and no ordinary warrior of the word. His simplicity hid an advanced degree of sophistication which every young writer will do well to study.

Achebe knew how to place his finger on the pulse of his environment. If we consider the fact that he wrote the bulk of what became his first book, Things Fall Apart, at about age 26, we have to conclude that he must have paid uncanny attention to both the language of his people and the structure of their society in a way that we hardly ever see any more in new writers. Achebe harnessed his prodigious talent early and set about the task of portraying his environment with as much realism as any man in the literary trade could have hoped to do. Of the quartet of Christopher Okigbo, J.P. Clark, Wole Soyinka and Achebe, the most readable prose belonged, by far, to Achebe. He ran with it. The world won’t ever forget that accumulative narrative voice that built and built until his denouement shattered the ambience.

My relationship with Achebe is personal. In the way that words shape relationships, mine has been shaped with this icon, this iconoclast, long before I became conscious of the process that was taking place. I think Achebe was the first writer I liked and the first writer I picked a quarrel with. I cannot count how many books of Achebe I have purchased or given away but for sure he is the one writer I have invested in the most. This creates problems of a peculiar nature as one does not like to see an author so cherished make even one mistake. It is humanly impossible.

In the house of my father, a teacher of literature and translator of Shakespeare among other things, Chinua Achebe was required reading. That was the highest compliment paid to any author in my father’s house for not even Shakespeare was required reading. Only three others, J.P. Clark, Wole Soyinka and Faulkner shared that pride of place. I had discovered Achebe on my own terms, however. It was very much on the order of a discovery one makes, of trigonometry, when one was supposed to be ripe only for arithmetic.

I was nine years old when I read A Man of the People, my first Achebe. I remember reading it all night in 1979 in the staff quarter my father occupied at Olivet Heights in Oyo. Nothing has ever been the same after that experience. In retrospect, I realize it was a fortuitous turn of events that I didn’t pick Arrow of God or Things Fall Apart or Girls at War first. I have had to go back time and time again for different readings of the same Achebe texts. It is a peculiar quality of Achebe, that thirty-three years after my initial encounter with him, Achebe remains compulsive reading. Today, the most expensive book I own is a luxury (limited) edition Achebe, all of $4,000 and, frankly, I doubt I will ever invest that much again in any other author, living or dead. But it is a good feeling, a great feeling, to know that Africa has one of those authors whose books you have to insure.

Any literary life will ultimately be measured by two simultaneous indices, as Berryman suggested: that of talent and that of achievement. A life like Chinua Achebe’s, however, is in a class all by itself, a class sui generis. When such a life has run its course, it’ll require an encomiast of the stature of Xenophon who wrote the classic tribute to Agesilaus. Achebe had huge talents and achieved astronomical successes. He worked very hard, he dug very deep.

On the 11th of September 2012, in the city of Gyeongju, South Korea, strolling with the veritable John Ralston Saul, international President of PEN, the oldest writer’s organization in the world, that writer and philosopher regaled me with the story of Achebe and PEN. In the mid eighties, Ralston Saul and a few other radical elements in world literature had canvassed for Chinua Achebe to be voted as President of PEN International. They lost narrowly at the elections. I saw in Saul’s eyes the conviction that he had been the equivalent of a cardinal rooting for a black Pope, a dancer to a distant tropic drum. Few had seen what he saw back then. Not anymore. Africa’s best are at the forefront of the writing profession everywhere today and it is undeniably due to the labours of such great spirits as Chinua Achebe. Let him rest now that he belongs to the ages.

Tade Ipadeola is a lawyer and President of Nigerian PEN, follow him @tadepen.