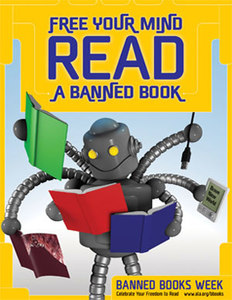 It’s time again for Banned Books Week, that annual celebration of one’s freedom to read and the importance of the First Amendment. Held during the last week of September, Banned Books Week highlights the benefits of free and open access to information while drawing attention to the harms of censorship by spotlighting actual or attempted book bannings and challenges across the United States. Intellectual freedom—the freedom to access information and express ideas, even if the information and ideas might be considered unorthodox or unpopular—provides the foundation for this week-long celebration. So if you love reading and you believe in the first amendment, join the hundreds of libraries, book stores, and literary and human rights organization for this year’s celebration.

Here’s what you can do:

Several months ago, PEN America asked PEN Members to take part in a virtual Global Book Swap, where novelists, poets, translators, and editors from around the world exchanged their favorite foreign-language books. The outcome was published in PEN America 14: The Good Books and selections have been posted on The Daily PEN American.

For the 2011 Banned Books Week, we are now asking PEN Members to recommend s single book, banned or challenged in the United States or abroad, and to write about the influence it has had on their lives as writers and readers. To find out what’s been banned, check out the American Library Association’s top 100 Banned Books from 2000–2009, the Banned and Challenged Classics list, or the top 10 most banned books by year between 2000–2010.

Since 2000, the ALA has hosted Read-outs—a continuous reading of banned and challenged books—in Chicago, IL. In lieu of a physical Read-out this year, the ALA along with fellow cosponsors of Banned Books Week will host a virtual one where readers from around the world will be able to participate. Just record a video of yourself reading from your favorite banned or challenged book and upload it to the ALA’s dedicated Banned Books Week YouTube Channel, where videos of challenged authors and other celebrities will be posted in the coming days. More information about this year’s Read-out is available here.

Tweet, FB, Tumblr, blog, and even Myspace this post. Also visit the ALA’s Banned Books Week web site to learn how you can download a badge for your web site or blog, collect materials to write a letter to the editor of your local newspaper, and find activities and ideas to celebrate Banned Books Week in your community.

8. Nickel and Dimed: On (Not) Getting by in America, by Barbara Ehrenreich
Reasons: drugs, inaccurate, offensive language, political viewpoint, religious viewpoint