Breakout: Voices from the Inside—A Celebration of the PEN Prison Writing Program 2014 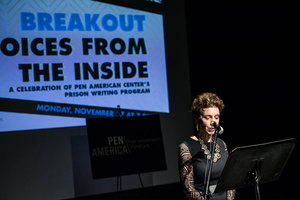 Every year, PEN receives nearly 1,000 submissions for its Prison Writing Contest, which for decades now has tried to light a small spark in the vast darkness of the prison industrial complex. And while that may sound noble—for the outside world to recognize the men and women on the inside—it is not only difficult but dangerous for the person doing time. To receive an award or be chosen to stand out from the invisible masses can bring harsh consequences.

We witnessed Charlie Norman, who, after he won the contest and received favorable attention in the press, was suddenly moved by the state of Florida from Daytona to a facility across the state, making it difficult for his friends and family to visit. After years as a model prisoner, he was unexpectedly placed in solitary confinement.

Did PEN’s recognition play a role in making Norman a target for discipline? Are the narratives that justify all sides reliable? At PEN, we worry about this. And yet, we still receive hundreds of letters from men and women serving sentences thanking us for the contest, saying it gives them an incentive to write, and a hope that somewhere, someone is listening. In a letter read aloud during Monday’s event, a winner expressed his gratitude for being given a rare chance “to approach beauty.”

In his closing remarks to this year’s reading, Prison Writing Program Director Jackson Taylor observed that “although we are meant to be distanced by the walls of a prison, events such as this reading bring us closer to the men and women writing behind bars.”

He went on to explain that all of the readers had unanimously agreed not to announce themselves, to better focus attention on the writers and the work being read.

We are grateful to all who participated in this beautiful and moving evening.