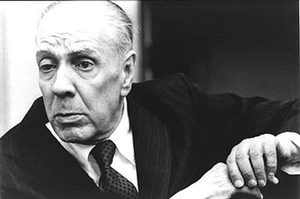 Borges used to tell an endearing story that continues to haunt me. When he was a child, his paternal grandmother lived in the house with his family. She was English; and Borges described how, as a small child, he knew that when he went to visit his grandmother, he had to speak in a certain way, and that when he spoke to the maids in the kitchen or to his mother, he had to speak in a quite different way. Much later, he learned that the way in which he spoke with his grandmother was called “English” and the way he spoke with the maids and his mother was called “Spanish.”

I think this is a crucial element in Borges’s formation. For people who are truly bilingual, an immediate separation sets in between language and the unsayable beyond, what we call “reality.” In other words, this is not a desk; “desk” is merely one word we use to describe it. A gulf sets in between what we perceive and the words we use.

Borges, I think, was always aware of this intense dualism. We have a dual nature. We are physical beings who live in the continuum of time, and we are also language users.  Language enables us to take pieces out of our lived time, and to move them out of time in the form of what Borges always called a “fiction”—poems, essays, stories, they are all fictions. A fiction is a construct of language, and we make fictions to make sense out of a reality which we fail to understand. This is the essence of Borges: our fictions are attempts to bring the world into order for the time being, but unless we continue to believe in them, they dissolve like smoke.

There is one quotation which Borges loved—I think it was his favorite quotation in English literature. It was from an essay of G. K. Chesterton’s on a fairly unknown painter called G.F. Watts. Chesterton said the following: “Man knows that there are in the soul tints more bewildering, more numberless, and more nameless than the colors of an autumn forest. . . . Yet he seriously believes that these things can every one of them, in all their tones and semitones, in all their blends and unions, be accurately represented by an arbitrary system of grunts and squeals. He believes that an ordinary civilized stockbroker can really produce out of his own inside noises which denote all the mysteries of memory and all the agonies of desire.” In other words, language could never accommodate the enormous reality beyond it.

Over a period of six or seven years, Borges wrote his most astonishing and moving poems. This one is called “Matthew XXV:30.” He wrote it in a state of great unhappiness. There’s a vast railroad station in Buenos Aires called Constitución, and he went up on the bridge above the station and had this revelation, recalling his whole life.

The first bridge, Constitution Station. At my feet
the shunting trains trace iron labyrinths.
Steam hisses up and up into the night,
which becomes at a stroke the night of the Last Judgment.

From the unseen horizon
and from the very center of my being,
an infinite voice pronounced these things—
things, not words. This is my feeble translation,
time-bound, of what was a single limitless Word:

“Stars, bread, libraries of East and West,
playing-cards, chessboards, galleries, skylights, cellars,
a human body to walk with on the earth,
fingernails, growing at nighttime and in death,
shadows for forgetting, mirrors busily multiplying,
cascades in music, gentlest of all time’s shapes.
Borders of Brazil, Uruguay, horses and mornings,
a bronze weight, a copy of the Grettir Saga,
algebra and fire, the charge at Junín in your blood,
days more crowded than Balzac, scent of the honeysuckle,
love and the imminence of love and intolerable remembering,
dreams like buried treasure, generous luck,
and memory itself, where a glance can make men dizzy—
all this was given to you, and with it
the ancient nourishment of heroes—
treachery, defeat, humiliation.
In vain have oceans been squandered on you,
in vain the sun, wonderfully seen through Whitman’s eyes.
You have used up the years and they have used up you,
and still, and still, you have not written the poem.”

The tiger was a pervasive image for Borges. He had seen tigers at the zoo as a child, he drew pictures of tigers, and the tiger comes up often in his writing as a symbol of absolute physicality, sensuality, that lives entirely in a world without language. And this is a poem about writing a poem about a tiger and, inevitably, failing to write a poem about a tiger. It’s called “The Other Tiger.”

I think of a tiger. The fading light enhances
the vast complexities of the Library
and seems to set the bookshelves at a distance;
powerful, innocent, bloodstained, and new-made,
it will prowl through its jungle and its morning
and leave its footprint on the muddy edge
of a river with a name unknown to it
(in its world, there are no names, nor past, nor future,
only the sureness of the present moment)
and it will cross the wilderness of distance
and sniff out in the woven labyrinth
of smells the smell peculiar to morning
and the scent on the air of deer, delectable.
Behind the lattice of bamboo, I notice
its stripes, and I sense its skeleton
under the magnificence of the quivering skin.
In vain the convex oceans and the deserts
spread themselves across the earth between us;
from this one house in a far-off seaport
in South America, I dream you, follow you,
oh tiger on the fringes of the Ganges.

Evening spreads in my spirit and I keep thinking
that the tiger I am calling up in my poem
is a tiger made of symbols and of shadows,
a set of literary images,
scraps remembered from encyclopedias,
and not the deadly tiger, the fateful jewel
that in the sun or the deceptive moonlight
follows its paths, in Bengal or Sumatra,
of love, of indolence, of dying.
Against the tiger of symbols I have set
the real one, the hot-blooded one
that savages a herd of buffalo,
and today, the third of August, ’59,
its patient shadow moves across the plain,
but yet, the act of naming it, of guessing
what is its nature and its circumstance
creates a fiction, not a living creature,
not one of those that prowl on the earth.

Let us look for a third tiger. This one
will be a form in my dream like all the others,
a system, an arrangement of human language,
and not the flesh-and-bone tiger
that, out of reach of all mythologies,
paces the earth. I know all this; yet something
drives me to this ancient, perverse adventure,
foolish and vague, yet still I keep on looking
throughout the evening for the other tiger,
the other tiger, the one not in this poem.

In thinking about Borges, and in translating him, what I remember mostly is his voice, both in Spanish and English. I can hear it at will, and I think it became so important because I realized, in all the years I knew him, that what he knew of other people came from their voices entirely. Being blind, he could hear the totality of someone—he would intuit the the people from their voices. So his voice became equally important to me in trying to translate him.

This is a passage from one of his most famous stories, “The Aleph.” A rather foolish fellow poet tells him that he has a secret Aleph in his cellar and volunteers to show it to Borges. The Aleph is one small point in space that contains all points of space. Borges, paradoxically, uses words to convey the amazement of the Aleph, a kind of vision that cannot be conveyed in words.

Under the step, toward the right, I saw a small iridescent sphere of almost unbearable brightness. At first I thought it was spinning; then I realized that the movement was an illusion produced by the dizzying spectacles inside it. The Aleph was probably two or three centimeters in diameter, but universal space was contained inside it, with no diminution in size. Each thing (the glass surface of a mirror, let us say) was infinite things, because I could clearly see it from every point in the cosmos. I saw the populous sea, saw dawn and dusk, saw the multitudes of the Americas, saw a silvery spiderweb at the center of a black pyramid, saw a broken labyrinth (it was London), saw endless eyes, all very close, studying themselves in me as though in a mirror, saw all the mirrors on the planet (and none of them reflecting me), saw in a rear courtyard on Calle Soler the same tiles I’d seen twenty years before in the entryway of a house in Fray Bentos, saw dusters of grapes, snow, tobacco, veins of metal, water vapor, saw convex equatorial deserts and their every grain of sand, saw a woman in Inverness whom I shall never forget, saw her violent hair, her haughty body, saw a cancer in her breast, saw a circle of dry soil within a sidewalk where there had once been a tree, saw a country house in Adrogué, saw a copy of the first English translation of Pliny (Philemon Holland’s), saw every letter of every page at once (as a boy, I would be astounded that the letters in a closed book didn’t get all scrambled up together overnight), saw simultaneous night and day, saw a sunset in Querétaro that seemed to reflect the color of a rose in Bengal, saw my bedroom (with no one in it), saw in a study in Alkmaar a globe of the terraqueous world placed between two mirrors that multiplied it endlessly, saw horses with wind-whipped manes on a beach in the Caspian Sea at dawn, saw the delicate bones of a hand, saw the survivors of a battle sending postcards, saw a Tarot card in a shopwindow in Mirzapur, saw the oblique shadows of ferns on the floor of a greenhouse, saw tigers, pistons, bisons, tides, and armies, saw all the ants on earth, saw a Persian astrolabe, saw in a desk drawer (and the handwriting made me tremble) obscene, incredible, detailed letters that Beatriz had sent Carlos Argentino, saw a beloved monument in Chacarita, saw the horrendous remains of what had once, deliciously, been Beatriz Viterbo, saw the circulation of my dark blood, saw the cods and springs of love and the alterations of death, saw the Aleph from everywhere at once, saw the earth in the Aleph, and the Aleph once more in the earth and the earth in the Aleph, saw my face and my viscera, saw your face, and I felt dizzy, and I wept, because my eyes had seen that secret, hypothetical object whose name has been usurped by men but which no man has ever truly looked upon: the inconceivable universe.