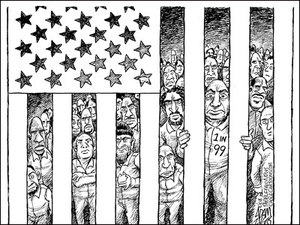 If unusual practices call for unusual explanations, then what kind of explanations will do for American criminal justice practices? The United States seems not merely to tolerate but actually to revel in inflicting barbaric human degradation upon prisoners—not just for months or years, but for decades and lifetimes—in a manner, and to an extent, unrivaled anywhere else in the Western world; and for the most part, Americans seem not to care about the cruelty. A great many, indeed, endorse it. Faced with such egregious exceptionalism, it should be no surprise that thoughtful observers have been hard pressed to find a satisfactory account of the insensibility of most Americans to the continuing irrational enormity. It may well be that the correct explanations are legion.

Not long ago, at a meeting of the Concerned Lifers Organization in the Washington State Reformatory at Monroe, Washington, I participated in a discussion of the criminal justice system with a successful American attorney and businessman who is also an instructor at distinguished local universities and colleges. Pointing to the humane and rational approach to crime in the Scandinavian countries, where even life sentences for murder typically result in no more than twenty years of incarceration and where prison conditions aspire to standards of decency and humanity unknown in the United States, I observed that what most Americans would call lenience and what many Europeans consider a respect for human dignity had neither endangered the public nor promoted recidivism in those nations. The response from the sometime Republican was that the Scandinavian countries could not be compared to the United States: they were “ethnically homogeneous.” He went on to say that he had visited Finland, and had asked to be taken to the bad neighborhoods, but had been surprised to discover that there were none: no slums, no red-light districts, no places where children wouldn’t be safe at night. America could not be compared to such a nation. I suspected at the time, and even after reflecting on it for many months, that his reference to “ethnic homogeneity”—the precise relevance of which be never quite explained—worked effectively to conceal, especially from himself, the feeling that the presence of ethnically different—but particularly, criminals made for an irredeemable Other in America that could never be reintegrated into decent society through compassionate measures. He studiously ignored the counter-example of Canada that I adduced: a nation which has more in common with the US than any other, and where carceral practices are within Western European norms despite a racial diversity as great as that of the US, if better integrated.

Michelle Alexander would certainly have had no doubts about what was going on. In her first book, The New Jim Crow: Mass Incarceration in the Age of Colorblindness, the young scholar and civil rights attorney argues that criminality has become the means for legitimating and perpetuating racial control without explicitly invoking race. American criminal justice now operates against black Americans in a way analogous to the notorious Jim Crow laws of the segregated South. “Rather than rely on race, we use our criminal justice system to label people of color ‘criminals’ and then engage in all the practices we supposedly left behind” (Alexander 2). Bill Moyer featured her on his PBS program and her book has made quite a splash, going through several printings and garnering attention well beyond the ordinary academic audience. For her, the emergence of America’s systematic mass incarceration makes sense only when understood as a new form of racial control following the demise of segregation and the achievement of nominal legal equality for blacks in the 1960s. Colorblindness is a veneer that conceals a systematic functional racism that is mediated by a criminal justice system which operates to exclude millions of black Americans from society by permanently relegating them to the condition of pariah outcasts. America’s uniquely punitive system is best understood as a consequence of its unique white supremacist history of slavery and racial violence: it is the living legacy of a caste-based domination that has, by becoming ostensibly colorblind, become more rather than less deadly for being insidious.

It is, indeed, a powerful thesis. It may well be the most important explanation of the change in attitudes towards crime and rehabilitation of a great many Americans in the late 1970s, during the radical transformation of the criminal justice system that created the new system of mass incarceration. One need only think of the media’s description of the prisoner rioters at Attica as being “led by blacks,” the symbolism suggested by the name “Black Panther,” or the image of crime in New York (as seen in motion pictures from Taxi Driver to Death Wish) in the late 1970s, to understand the power that the fear of blacks has exerted on many. Perhaps the most powerful component of the book is Alexander’s careful and convincing description of the myriad means by which ex-prisoners are permanently excluded from society, ordinary life-hopes, and mere human dignity, and consigned for the rest of their lives to a disfigured, menial, and subservient existence on the margins. But essential though Alexander’s explanation is to any full historical explanation of the present system, it does not work to explain all the changes in thinking about crime that occurred in the period, or to explain what sustains criminal justice policies in the present. The popular election of judges and prosecutors, the complete acceptance of incapacitation and retribution as the principal objectives of penal policy, populist resentment against intellectuals, and the preference for “fair” sentencing achieved by mechanical rules based on predetermined objective criteria rather than any individualized, subjective, case-by-case consideration—all these factors sustain the dominant criminal justice mentality with their own independent logics. The harshness of the penalties enacted recently to crack down on the meth trade, which is almost as predominantly white as crack is black, all but proves that race cannot any longer be regarded as the determinative factor.

The ugliness of American practices is deeper and broader than race can fully explain. Consequently, Alexander’s analysis has difficulties as an effective argument for reform. Something Mencken observed in the Roaring Twenties apropos the wallpaper and architecture of Westmore’s industrial heartland seems as relevant to the present impasse as race is:

Here is something that the psychologists have so far neglected: the love of ugliness for its own sake, the lust to make the world intolerable. Its habitat is the United States. Out of the melting pot emerges a race which hates beauty as it hates truth. The etiology of this madness deserves a great deal more study than it has got. There must be causes behind it; it arises and flourishes in obedience to biological laws and not as a mere act of God. What, precisely, are the terms of those laws? And why do they run stronger in America than elsewhere? Let some honest Privat Dozent in pathological sociology apply himself to the problem. (Mencken 392)

Mencken’s reflections in this concluding paragraph to his essay “The Libido for the Ugly” were incited by hideous houses; but they apply just as well, if not better, to the design of the contemporary American prison and jail system in which more than two million people live. What is wrong with Americans? If Mencken resorts, in characteristically inflammatory style, to racial explanation in an idiom (race and biological laws) that has lost its currency, the social and cultural pathology that he identifies remains pervasive. We may well doubt that biological laws, the melting pot, or even mere acts of God have much to do with it—Mencken is nothing if not ironical—but it remains the case that ineptitude, indifference, and even racial domination are inadequate to explain the American embrace of such ethical ugliness.