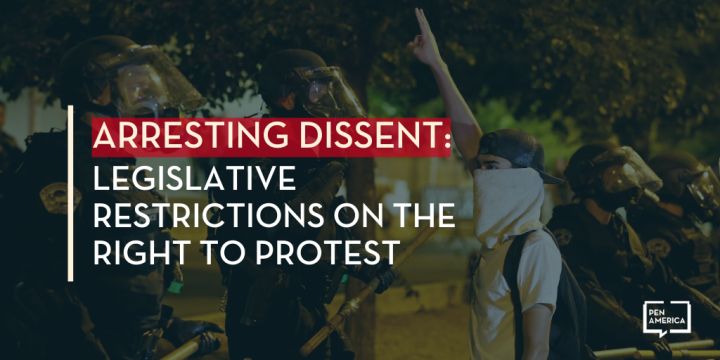 Basic democratic rights have increasingly come under siege since the 2016 election, and not just at the federal level. In this report, Arresting Dissent: Legislative Restrictions on the Right to Protest, PEN America shines a spotlight on the proliferation of state-level legislative proposals seeking to limit protest rights.

PEN America has documented an explosion of 116 state bills introduced since 2015—110 of which were introduced between 2017 and 2019 alone—that create new penalties or harsher sentences for protesters. In many cases, these bills appear to be direct responses to particular protests, or designed to constrain particular protest movements. These include “critical infrastructure” bills introduced in states that have seen significant pipeline protests, and anti-highway obstruction bills following on the heels of protests that have used road obstruction as a tactic.

Legislators sometimes state openly that they are introducing legislation with specific protests or protest movements in mind. At the same time, the president expresses hostility toward certain protest movements, and support for others, depending on whether or not they align with his views. This kind of selective interpretation of the First Amendment makes all too clear the political motivations that have colored legislative efforts, and has created fertile ground for a pattern of efforts to restrict protest rights.

Of the 116 bills introduced since 2015 that would limit protest rights, 23 bills in 15 states have become law, and only two of those have been challenged in court. Already in the 2020 session, PEN America notes 16 similar bills working their way through state capitols. These new laws  place a heavy burden on individuals in states where these bills have passed, forcing them to weigh their civic interest in exercising their First Amendment rights against the very real potential of being arrested or facing other reprisals.

REVIEW THE INDEX OF ALL 116 PROPOSALS »