An Excerpt from Cervantes Street 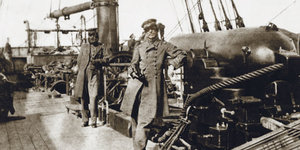 We sailed under clear skies until night fell. A moonless sky favored us. In complete darkness we slipped through the narrow and heavily fortified entrance to the Gulf of Corinth. The Turkish navy awaited us at the eastern end of the gulf.

On October 7th I woke up feverish and vomiting, and was ordered to stay below deck during the battle. “Your Grace,” I said to Captain Murena, “I joined the King’s forces to do my duty, and I would rather die for God and Spain than survive the battle without fighting.”

The captain frowned and said: “As you wish, Cervantes. But you will be stationed by the skiff and not move from there.” He added, “You must be a great fool. Most men in your condition would be happy to be exempted from fighting. God favors fools and mad men. May He be with you.”

On the southeast side of the gulf, where the Peloponnesian Mountains, witnesses to many epochal ancient wars, rose I imagined I saw and heard the great Greek heroes of antiquity cheering us on from the wooded hills. The currents of the gulf steered our fleet toward the Turkish ships, which were stationed in a line across the bay. Dawn revealed the triangular red flags of the enemy decorated with the Moon Star; they seemed like an airborne wave of brilliant color. In the center of their formation Ali Pasha’s immense galleon stood out; on its mast was hoisted a colossal green flag on which, it was said, Allah’s name was woven in gold twenty-nine thousand times. The Turks’ fearsome chants, and the spectacle of their glowing sails, lent majesty to the occasion. Their battle cries sounded as if they’d erupted from a giant common throat, one that belonged to a dragon whose red eyes stared at us from the clouds.

For hours both navies were frozen on the surface of the sea.  The noon sun was blazing above us when the orders came to prepare for battle. Don John’s strategy became evident as the fast currents in the greenish waters thrust us in the direction of the enemy: we would not meet the Ottoman navy head-on. Our armada parted to form two flanks, while leaving behind in the middle a line of ships with our most powerful cannons facing the Turks. Both columns of ships traveled close to the shores of the bay. Rodrigo and I were both in the northern formation, but on different ships. I no longer felt sick.

The Turks fired first, producing a rushing wall of flame, which was followed by a thundering sound, as if the sky had crashed down to earth. I felt my heart stop, until the cannons of our galleons blazed back, aiming at Ali Pasha’s ship. This was the sign for our two columns to aim our prows at the Turkish vessels. We prepared to ram their fleet as our artillery fired. Of all their weapons, we feared most the Greek fire the Turks used. Once it hit a ship, it was impossible to put out: no amount of water or sand could quench its burning, steady fury.

As the two fleets got within striking distance of each other, and the harquebuses and cannons fired salvos on both sides, a hot mass of smoke swallowed up Christians and Turks alike. A force I did not understand seized me: I was no longer myself, no longer just one body, but part of something prodigiously large—a nation, a religion, a way of life, a soldier in the army of the true God. I became thousands of men, invulnerable, as tall and fearsome as a Cyclops.

Orders came to board the Ottoman ships, and to engage the enemy in hand-to-hand combat.  Battleaxes were wielded.  For the next few hours severed fingers, hands, arms, feet and heads pelted me, and I was drenched by mutilated and headless bodies shooting streams of blood.

Once the fighting started, my fear evaporated. When one man died, he was replaced by another one; when that other man fell wounded, a healthy one emerged from behind him, creating an endless reserve of soldiers always venturing forward, a bloodthirsty horde shouting slogans, insults, prayers, curses, in Spanish, in Italian, in Turkish, in Arabic.

I had slain many Turks when a gunshot tore my left hand to pieces, leaving the bones exposed and protruding. At first I felt no pain and kept fighting, striking and killing with my healthy arm until a thump on my chest sent me reeling back: an harquebus blast had dug a hole in my torso. I was trying to block the flow of blood by pressing my fist against the orifice, when another deafening charge hit me inches from my fist. My chest was heavy with the gunpowder and iron imbedded in my flesh, and I staggered around as if drunk, smelling my charred flesh, trying to hold onto anything to keep my balance, to keep myself from collapsing on the deck of the ship where I knew I would be trampled to death.

As men were wounded and killed all around me, as ships caught fire and sank with loud groans, as choking black smoke enveloped us, I continued to swing my sword at anything that moved, intending—despite my weakened state—to vanquish every heretic in my path until I died.

Where was my brother? I prayed that he had been spared; prayed that if he was mortally wounded, and in excruciating pain, a compassionate soul would put an end to his suffering. I prayed that our parents would not lose both sons in one day.