An Era of Censorship Comes to a Close in Myanmar 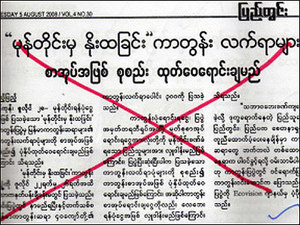 The times they are a-changin’. Just a year and a half ago, Myanmar was listed among the most restrictive places to work as a journalist or writer, and PEN was tracking the cases of 11 writers in prison. Now, as we near the end of a month when we have been reflecting on the persistent impulse to censor, we may be seeing a flowering of creative freedom in what not so long ago would have seemed the unlikeliest of places.

For nearly five decades, the publication of literature and journalism in Myanmar was controlled by the stringent hand of the Press Scrutiny and Registration Division, or SPRD—the country’s censorship office. 100 employees read through every single manuscript, article, poem, newspaper, and magazine, and, with a red pen, drew a giant X over anything that was too sensitive to publish. Entire books and magazines were banned.

A series of reforms aimed at opening up the country to greater freedom and democracy—including freeing the jailed opposition leader and Nobel Peace Prize Laureate Aung San Suu Kyi—brought great promise at the end of 2010. Change truly began to trickle down when Thein Sein, a former military officer and Myanmar’s first civilian president, was sworn in on March 30, 2011. In June 2011, censorship began its slow retreat: stories about entertainment, health, children, and sports were no longer under the red pen of the SPRD.

And last month, the government announced that the SPRD would close. The announcement was made by the office’s own head, U Tint Swe, who, as it turns out, is also an author. “We could not avoid change,” he told The New York Times in an interview published on September 21. “The whole country wanted to change.”

Reforms have affected not just the availability of information to the public but the writers and dissidents who provide it. In October 2011, Thein Sein announced a general amnesty of prisoners. Comedian, poet, activist, and PEN American Center Honorary Member Maung Thura, known as Zargana, was one of the first to be released from prison. I had the honor of having dinner with him in New York in February, after he was given his passport and permitted to travel to the United States and Canada to visit family and accept the One Humanity Award from PEN Canada. Over wine and pasta, Zargana told me about his extraordinary experiences in prison, and about his initiative to stage a film festival in Myanmar. The country, he said, was on the cusp of real change.

Just a month earlier, in January 2012, Nay Phone Latt, our 2010 PEN/Barbara Goldsmith Freedom to Write Award winner and an influential blogger and poet, was released in the second wave. He immediately went back online. He told us it was his goal to bring new media to the people of Myanmar. He was starting an organization to train youth in information and communication technologies. Now, with a new collection of stories written in prison, Nay Phone Latt is a resident in the Iowa Writer’s Program. Expect to hear more great things from him soon.

Aung San Suu Kyi is now a member of parliament. She’s visited Europe, once her second home, and two weeks ago accepted the Congressional Medal of Honor at the U.S. Capitol in Washington, DC. Even more stunning, The New Light of Myanmar, the country’s official mouthpiece, has covered her visit. Though the article, mentioning the honor she received in DC, appeared on the last page, it is remarkable that it has appeared at all. And at the UN, Thein Sein paid tribute to “The Lady,” as she’s known, in his speech to the General Assembly, praising her “efforts for democracy” and congratulating her for her Congressional Medal of Honor.

And last Tuesday, it was announced that the Irrawaddy, one of Myanmar’s opposition newspapers that runs from an office in exile in Thailand, has opened an office in Yangon, Myanmar’s capital, after politics and religion were the last of the topics to be removed from the mighty censorship list last month.

There is still obviously a long way to go, but never has there been more hope that the people of Myanmar will fully enjoy their inalienable right to freedom of expression. After so many years of nothing but depressing news coming out of the country, it may finally be time to celebrate.

There's no doubt that difficult conversations will come up this holiday weekend about politics and the spread of misinformation. Watch a recording of our conversation with experts on human psychology, tech & media about how to navigate these conversations: https://bit.ly/363PnFC

Catching up on some reading this #Thanksgiving weekend? Check out PEN America's reading list from our fall season of #PENOutLoud for a list of books that push conceptual and formal boundaries to examine important and ongoing issues: https://bit.ly/3ceek2s.