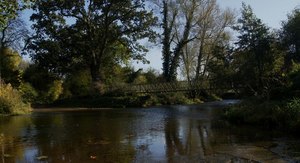 This piece was submitted by Joanne Hillhouse as part of the 2014 PEN World Voices Online Anthology.

A thin girl crouches behind the flimsy cover of a cassi tree when she hears cars, more than one, coming up the path. She is naked and old enough now, at 13, to be embarrassed by that. Her mind is a fog and she is wet, like she’s been in the water.

Only that isn’t possible, is it?

None of that explains why she is wet and why when she licks her lips it tastes like salt, and why when the water trickles down her back, it burns, like there are cuts there she can’t see. She’d done a little dance earlier, like a dog chasing its tail, trying to see, and aching for the burning to stop.

It was like the burn of a good beating, the kind of beating she got the first time she’d run away. She thought mammy was trying to strip her skin off of her back that time; the way she sweated and screamed, her face ugly, arms flapping, as the belt wailed. Then Mammy had called out to everybody she knew:

“You all talk to that gyal dey, you nuh, ca me’ll kill she”.

After the fourth or fifth time, the social worker told mammy not to hit her anymore; that when she ran away again, Mammy was just to call them and let them handle it. Only they were short staffed, and the police was “don’ care ah damn” – Mammy’s words – and with everybody looking the other way and her mother’s hands tied, the girl knew she could stay gone for weeks if she set her mind to it.

But she didn’t plan on ending up here at Devil’s Bridge which she only recognized because of a long ago school field trip. How would she have even remembered the route or hitched a ride, and why? She can’t cut through the fog in her mind to get to the answers, and the cars are closer now, causing her to draw in even tighter behind the spindly cover of the acacia, thankful for the grey of ‘foreday morning.

They pass. Bringing up the rear is a Nissan pickup loaded with things, manned by three boys, boys maybe a little older than her, sitting on the very edge of the vehicle as it bounces up the path.

She tracks them, all the way up to where the path ends and the land flattens out into giant slabs of bleached and jagged rock, and patches of thin grass. She watches as they unpack kites, of all things, and a cooler, from the pickup, and turn up the stereo. Reggae blasts to wake up the morning. “Sun is Shining,” sings Bob as the sun begins its lazy stretch and yawn into daybreak.

This story appears in full in Pepperpot: Best New Stories from the Caribbean, Peekash Press (2014).