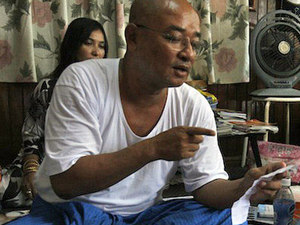 On October 18, 2021, Zarganar was conditionally released after over six months in arbitrary detention. Zarganar was arrested and detained by the military junta on April 6, 2021, as part of a broader campaign by the military to crackdown on cultural figures following the February 2021 military coup. While the legal basis of Zarganar’s arrest is unclear, the junta had recently issued arrest warrants charging at least 100 people in the literary, arts, and journalism fields with spreading information that undermines stability and rule of law. Zarganar had written critically about the coup on Facebook shortly before being arrested. In 2011, Zarganar was released from a 35-year sentence for violating the Electronic Transactions Act, which regulates electronic communications, as a part of widespread general amnesty.

Maung Thura (“Zarganar”) is a poet, opposition activist, and leading comedian in Burma. He began a career in activism through comedy while completing his undergraduate degree. As a performer, he has drawn national attention as a primary political commentator in Burma. His poetry has also been published in the PEN International anthology This Prison Where I Live.

Zarganar was first arrested during the student uprisings in October 1988 after making fun of the government, but was freed six months later. However, he was imprisoned for four years after impersonating General Saw Maung in front of a crowd of several thousand at the Yankin Teacher’s Training College Stadium in Rangoon on May 19, 1990. Upon his conviction, Zarganar was held in solitary confinement at Insein Prison, where he began writing poetry.

After his release in 1994, Zarganar was banned from performing in public, but continued to make tapes and videos that were strictly censored by the authorities. Zarganar was again subjected to governmental harassment in May 1996 when he spoke out against censorship to a foreign journalist. He was banned from performing his work altogether and stripped of his freedom to write and publish.

On September 25, 2007, he was arrested for his support of the monks demonstrating in Rangoon. He was released from detention on October 18, 2007.

Zarganar was again arrested on the evening of June 4, 2008, after leading a private relief effort to deliver aid to victims of Cyclone Nargis, which struck on May 2, 2008. Zarganar had given several interviews to overseas radio stations and other media about his relief work and the needs of the people. He also reportedly ridiculed state media reports about the effects of the cyclone, which the government claimed were minor.

On November 21, 2008, Zarganar was sentenced to 45 years in prison for violating the Electronic Transactions Act, which regulates electronic communications. On November 27, 2008, he was sentenced to a further 14 years in prison for offenses under four sections of the criminal code, which brought his total sentence to 59 years. On February 14, 2009, the Rangoon Division Court reduced Zarganar’s prison term by 24 years, leaving him to serve 35 years. He collapsed in the Myitkyina prison in late April 2009, and is reportedly suffering from heart problems, jaundice, and a stomach ulcer.

On October 12, 2011, Zarganar was released from Myitkyina Prison in Kachin State, northern Myanmar, as part of a widespread general amnesty. There are concerns, however, that his release is conditional. In an interview with the BBC after he arrived back in Rangoon, he said, “If I do something wrong they will send me back. I’m not happy today because there are so many of my friends still in prison.”