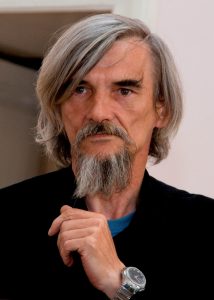 Yury Dmitriev, Russian historian and head of the Karelian branch of the human rights center Memorial, was detained in Petrozavodsk on December 13, 2016, on suspicion of production of child pornographic material. A case of child pornography was opened due to the existence of nude photographs of his adopted daughter, who was under Dmitriev’s guardianship, stored on his computer. The Russian security services (FSB) found the pictures because of an anonymous statement. According to Dmitriev, he saved the photos on his computer to report about the physical development of the child to social services. After being released in January 2018, he was detained again in June 2018 on similar charges. During the hearings in the second wave of charges, the prosecutor asked the court for a 15-year sentence. On July 22, 2020, the court convicted Dmitriev of sexual assault, while clearing him of charges of child pornography, indecency toward minors, and illegal possession of firearms. He was ultimately sentenced to three and a half years in prison. Though he was initially set to be released in November 2020, the Karelia Supreme Court overturned the rulings acquitting Dmitriev of the aforementioned charges in a backdoor trial and increased his prison sentence to 13 years. Human rights activists in Russia say that the case against Dmitriev is fabricated and politically-motivated.

Yury Dmitriev is a historian and human rights activist from Petrozavodsk, Russia. Through his work, thousands of camp graves and burial places of victims of mass executions of Stalin’s ‘Great Terror’ were discovered in Karelia. Dmitriev is the author of several memory books that contain information about the people who were shot or died in 1937-1938, including those 9,500 people shot and buried in the Sandarmokh memorial cemetery.

On December 13, 2016, Yury Dmitriev was detained and later arrested on charges of producing child pornography through an anonymous indictment. According to investigators, Dmitriev was engaged in the production of child pornography, taking pictures of his adopted daughter (she was 11 years old in 2016) for several years, however he has never published or shared the pictures. As stated in the investigation documents, “depraved actions” consisted of the very act of photographing a naked child. Dmitriev denied the charges, claiming that the images of his daughter were taken to document her state of health.

Dmitriev was in custody for a year; after an additional investigation and a psychological assessment, he was released. But on June 14, 2018, the Supreme Court of Karelia overturned his acquittal and quashed the decision of the Petrozavodsk city court. Dmitriev was detained at the exit from Petrozavodsk while he was driving to the cemetery a week after that. The next day, the Investigative Committee announced that Dmitriev had become a suspect in a second criminal case concerning his daughter. He was accused of sexual assault concerning a person who has not reached the age of fourteen, was arrested, and underwent enforced psychiatric testing. After years holding Dmitriev in detention, the prosecutors requested a 15-year prison sentence for Dmitriev. On July 22, 2020, a court in the Republic of Karelia convicted Dmitriev of sexual assault and sentenced him to three and a half years in prison with time served. The court acquitted him of three other charges: child pornography, indecency toward minors, and illegal possession of firearms. Upon appeal by the prosecutor, the Karelia Supreme Court later overturned the acquittals in Dmitriev’s case, increasing his prison sentence to 13 years in total. The Supreme Court held the appeals hearing on September 29, 2020 behind closed doors—neither Dmitriev nor his defense lawyer were present.

September 29, 2020: Following an appeal by the prosecution, the Karelia Supreme Court overturns Dmitriev’s prior acquittals, which increases his prison sentence by nearly ten years. The appeal hearing takes place behind closed doors, without the presence of Dmitriev or his lawyer.

July 22, 2020: A court in the Republic of Karelia found Dmitriev guilty of sexual assault and handed him a sentence of three and a half years in prison. He was cleared of three other charges: child pornography, indecency toward minors, and illegal possession of firearms. With time served, he is set to be released November 2020.

July 6, 2020: The state prosecutor requests a 15-year prison sentence for Dmitriev during the first day of hearings. The judge is expected to announce the verdict on July 22.

May 28, 2020: The European Union releases a statement calling for Dmitriev’s immediate release from detention. The next hearings in his case are scheduled for June 15th and June 16th.

March 23, 2020: Having already detained Dmitriev for approximately 20 months, the court extends Dmitriev’s detention until June 25th. The next hearing is scheduled for April 14th.

June 27, 2018: Yury Dmitriev is detained on the way out of Petrozavodsk. A criminal case about violent acts of a sexual nature has been brought against him. Under the article on sexual assault concerning a person who has not reached the age of 14, Yuri Dmitriev faces up to 20 years in prison.

January 28, 2018: Yury Dmitriev is released from Petrozavodsk pre-trial detention on bail after a supplemental investigation and psychological assessment. In the second examination, that was appointed during the criminal case in court at the request of the prosecutor’s office and conducted in the Federal Department of Independent Judicial Expertise, they refused to consider the pictures pornographic.

April 5, 2018: The Petrozavodsk City Court acquits Dmitriev under the articles on depraved acts and the production of pornography. He is cleared of the child pornography charges but sentenced to two years and six months of restriction of freedom and community service under the article on possession of weapons.

March 2, 2017: Dmitriev is officially charged with indecent assault against his young adopted daughter and illegal possession of weapons; his arrest is extended.

December 13, 2016: Yury Dmitriev is detained and later arrested on charges of producing child pornography through an anonymous indictment. According to investigators, Dmitriev had been engaged in the production of child pornography, taking pictures of his adopted daughter (she was 11 years old in 2016) for several years; however, he had never published or shared the pictures.

Iranian human rights lawyer Nasrin Sotoudeh has been transferred from Tehran's Evin Prison, where most political prisoners are held, to a tougher Qarchak jail for female criminals, despite suffering heart problems following a hunger strike. https://bit.ly/34saAZ0